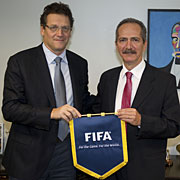 Zurich – Switzerland, Oct 12, 2012: The Official Mascot of the 2014 FIFA World Cup™ will embark on his first mission as part of an official FIFA/LOC delegation, accompanying FIFA Secretary General Jérôme Valcke, Bebeto, Member of the Board of Administration of the Local Organising Committee (LOC) and Brazil’s Sports Minister Aldo Rebelo to the next leg of the host city tour. The visit will comprise two venues which already hosted the 1950 FIFA World Cup, Belo Horizonte and Porto Alegre.

At the first stop in Belo Horizonte the delegation will visit infrastructure and urban mobility projects as well as the stadium on 16 October 2012. Antônio Anastasia, governor of Minas Gerais, Alberto Pinto Coelho, vice-governor of Minas Gerais and Márcio Lacerda, mayor of Belo Horizonte will provide updates on the preparations for the FIFA Confederations Cup and the FIFA World Cup.

The delegation will travel in the late afternoon to Porto Alegre, where the next day Beto Grill, Vice-governor of Rio Grande do Sul, and José Fortunati, Mayor of Porto Alegre, will showcase an urban mobility project, provide a presentation on the city’s plans and projects on 2014 as well as the stadium.

Next stop will be Rio de Janeiro, where on Thursday, 18 October the LOC Board meeting is on the agenda of the FIFA Secretary General Jérôme Valcke, Bebeto and Minister Aldo Rebelo. —- FIFA/ Photo by Enric Fontcuberta – FIFA via Getty Images