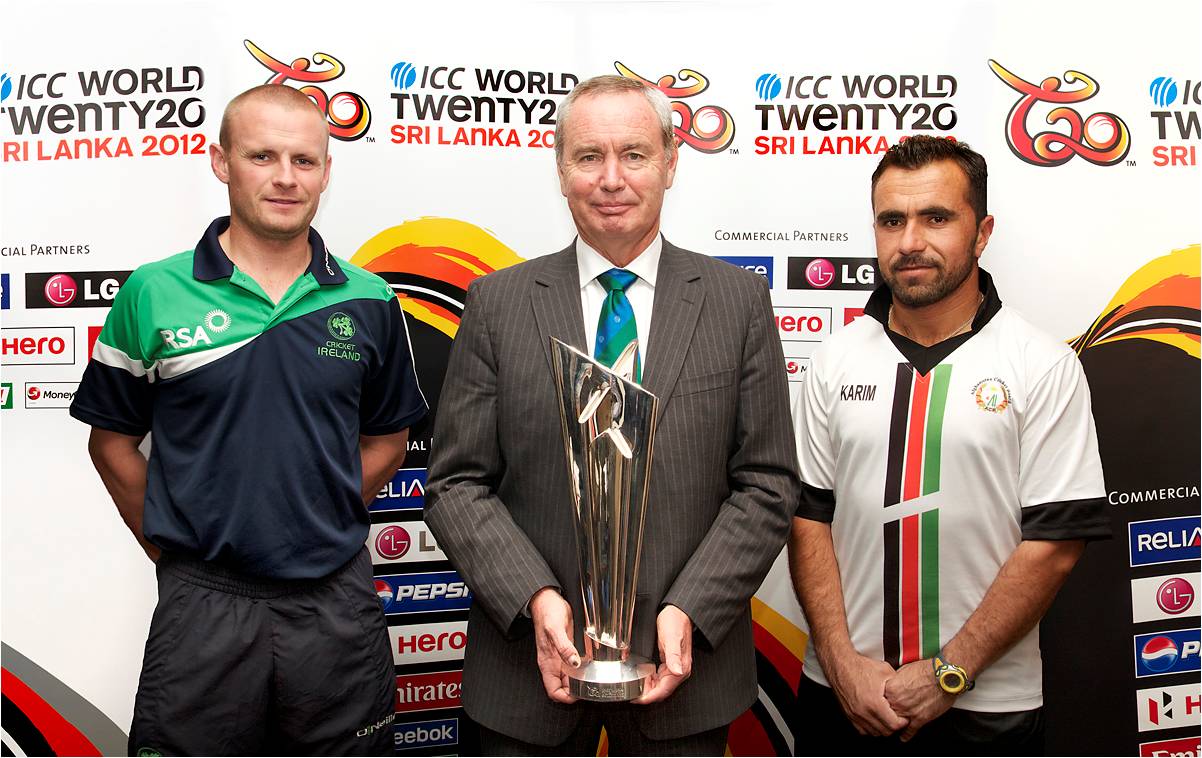 Dublin, July 04, 2012: The newly appointed ICC President, Alan Isaac, today posed with the ICC World Twenty20 Sri Lanka 2012 trophy alongside the captains of both Ireland and Afghanistan as it arrived in Dublin as part of its global tour ahead of the event proper beginning on 18 September in Sri Lanka.

Mr Isaac was joined by Ireland captain William Porterfield and Afghanistan captain Karim Sadiq at the Croke Park Hotel. Mr Isaac was in Dublin to witness the first of the two-match ODI series between Ireland and Afghanistan at Clontarf as part of the Pepsi ICC WCL Championship.

Both Ireland and Afghanistan are confident of doing well in their respective groups with Ireland captain Porterfield of the strong belief that the side is going to be progressing through to the Super Eight stage of the event.

“We know we’ve got a tough group with Australia and West Indies, but we strongly believe we’re there to not just cause the odd upset to the Full Member sides, but to progress all the way through the tournament.

“We’re really looking forward to Sri Lanka and being on the global stage once again showing the world what Ireland cricket can do. We did well in Dubai by winning the ICC WT20 Qualifier and now it’s about carrying those outstanding performances through to September and the tournament,” said Porterfield.

Meanwhile, fellow qualifier Sadiq admitted their group was going to be a little tougher than Ireland’s with the current champions England and former winners India.

“We’ve obviously got a very tough group with current champions England and previous winners India but we will take each game as it comes and not be overwhelmed with what we will face. It will be a tough challenge but a very exciting one and one we can learn and grow from as a side.

“Hopefully we will be back to full strength by September as we have a few injuries currently but it will be a fantastic tournament for us either way – to be playing in Sri Lanka, under conditions that we know, having held training camps there in the past, will be of a great advantage,” said Sadiq who is captaining the side currently while normal captain, Nawroz Mangal is out injured.

Mr Isaac added: “I’m delighted to be here in Ireland and to have met with the both captains and talked about the upcoming ICC World Twenty20 in Sri Lanka. It is going to be an exciting event and I am sure that both of these qualifying teams will give it 110 per cent when it comes to performing in this exciting global event later in the year.”

The men’s competition will be staged in Hambantota, Pallekelle and Colombo. The women’s group stages will be in Galle.

Ticket prices for the ICC World Twenty20 Sri Lanka 2012 start at US $0.25 for the single group games and the final itself is attractively priced between US $2.50 and US $45.

Tickets will be available at box offices located in Colombo, Hambantota and Kandy at selected MoneyGram outlets in Bank of Ceylon branches. It is mandatory for those purchasing tickets to have their NIC or a valid passport with them. A maximum of four tickets can be purchased by each person for the Super Eight stage, semi-finals and finals, and a maximum of six tickets per person for the group stage.

Online booking of tickets will be available by logging onto www.icc-cricket.com. Ticket collection will take place from 1 August 2012. —- ICC