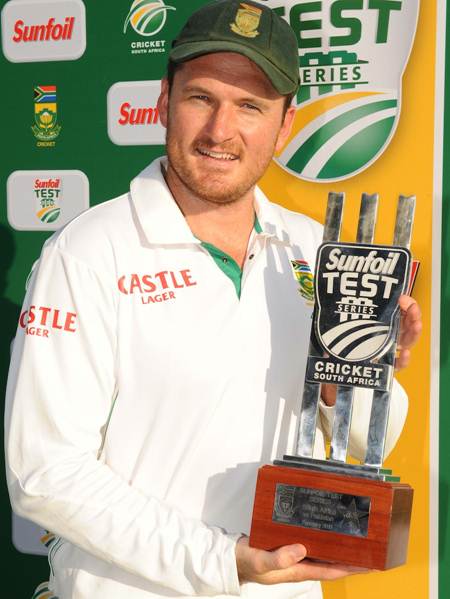 Centurion – South Africa, Test Series, Feb 24, 2013: For the two decades since their return from sporting isolation, South Africa has been among the top teams in the world, without ever having a sustained run as the undisputed No. 1. Even in the recent successes, an element of ruthlessness was missing, highlighted by the lack of consecutive Test victories over a four-year span ending with the hard-fought series victory over Australia.

Graeme Smith’s men have been unrelenting in correcting that anomaly over the home summer. Not only have they won all five Tests, they have utterly dominated almost all of them, as the margins suggest: innings and 27 runs, innings and 193 runs, 211 runs, four wickets and today at Centurion, innings and 18 runs. None of those matches went to the fifth day, the opposition was outclassed in the batting, bowling and fielding, and the near-perfect summer silenced any debate over which was the best side in the world – South Africa now enjoy a 10-point lead over second-placed England. It also quelled murmurs over South Africa’s less than impressive record at home in recent years.

It has been all one-way traffic over the past couple of months, and it looked like that would be the case on Sunday as well. There were plenty of cracks in the Centurion pitch making the odd ball swerve dramatically, and there was a bit of unpredictable bounce as well. And Dale Steyn removed Pakistan’s man for a crisis, Younis Khan, early with another of his typical have-to-poke-at outswingers.

Azhar Ali and Imran Farhat, however, kept the South African pace battery at bay for a couple of hours. Ali, who had only one substantial score in five previous innings, capitalized on the deliveries on his pads, and was happy to otherwise push around for the singles. He looked to leave as many deliveries as he could, and defended solidly as he patiently made his way to an unbeaten 27 by lunch.

Farhat, who couldn’t open the innings after having been struck on the hand yesterday, continued to show the confidence he had at the start of the first innings, crashing the ball past point repeatedly. He was not shy of the pull shot either when South Africa’s quicks pitched it short.

Still, despite their defiance, as has been the case all summer, a Pakistan batting collapse never seemed far away. What will hurt them is that this time the slide began due to a run-out. Soon after lunch, there was confusion whether to go for the second or not, and by the time Ali was sent back, a bullet throw from Steyn at fine leg had arrived, and the dogged partnership was over.

That opened the gates for a slew of wickets. Debutant Kyle Abbott got yet another wicket behind the stumps as Farhat edged through to the keeper, before Rory Kleinveldt finally had reward for his persistence. Misbah-ul-Haq nicked one through to AB de Villiers, and soon after Asad Shafiq gave away his wicket by punching a catch to Vernon Philander at mid-off.

With an hour still left till tea, and Pakistan’s tail notoriously fragile, there was a genuine chance that the match would finish before the session was scheduled to. Sarfraz Ahmed, who has been hopeless with the bat all the series, and Saeed Ajmal, who put up some resistance in Newlands as well, made sure the collapse didn’t extend beyond four wickets, playing out the 13 overs till the break.

Steyn returned to whip out two wickets, to go past the great Allan Donald’s Test haul of 330 wickets, and was one away from yet another five-for. Abbott got his ninth wicket of the match when he got the other debutant Ehsan Adil to steer a catch to third man.

That left Steyn and Abbott chasing the final wicket for personal milestones, and though Pakistan’s last pair, Rahat Ali and Mohammad Irfan, attempted many an agricultural swipe, the final strike just didn’t arrive. The frustration increased for South Africa as despite a bunch of chances, Rahat and Irfan batted out eight overs. Smith finally tossed the ball to his spinner, Robin Peterson, who finished off the game in his first over, getting Rahat lbw.

It completed a miserable series for Pakistan, whose batting has consistently let them down on the testing surfaces in South Africa. In this match, no batsman made a half-century, and in the series no batsman aggregated 200 runs.

For the home side, it was only the third time since their return that they have won three or more Tests in the series. And there was another record for Smith to savour as he became the first captain to win 50 Tests.

Not only have the results been magnificent for South Africa, they have been achieved through an eye-catching brand of cricket that combines aggression, grace and efficiency. South Africa fans, lap it up. —- By Siddarth Ravindran/ESPN & Image © Getty Images