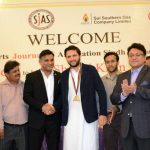 On the occasion Afridi disclosed that the Sindh Government is not helping him to build cricket academy in Karachi.

While talking to media the former all-rounder said: “If Benazir was alive then she would have helped me build a cricket academy.”

Sindh has a lot of talent, he claimed.
Answering a query on the upcoming talent of cricket in the country Shahid Afridi said: “If we promote cricket in school level then talent will groomed definitely.”

Afridi thanked SJAS for presenting him with the Gold Medal and congratulated all SJAS members for organizing such a great event.

Afridi said that the late Rashid Ali Siddiqui was a great human being, and that his services for sports in Sindh were respectful.

Responding to queries about a possible testimony match, Afridi said that “I have no need for a farewell match but I am thankful to Pakistan Cricket Board (PCB) for the offer. I really happy that our legends Misbah-ul-Haq and Younis Khan will get a farewell match.”

Afridi added that the PCB hadn’t given him any offer to work with the Board at any level.

“The Shahid Afridi Foundation (SAF) is not only my firm it’s Pakistan’s firm,” he said. “I really happy that God gave me a chance to help those people who deserved a support.”

Responding to query, the all-rounder said that Karachi is his city: “It’s my priority to play for Karachi Kings in Pakistan Super League (PSL).

Earlier, Junaid Ali Shah speaking on the occasion said: “Shahid Afridi is our legend”.
He disclosed that SAF is the number one in charity in the world.

Ex. chief selector, Salahuddin Ahmed Sallu hailed SJAS step to honor Shahid Afridi.
He said that former President SJAS, the late Rashid Ali Siddiqui was a brave man who had put in his best services in the field of sports.

He congratulated SJAS for organizing such a great event honoring the star cricketer.