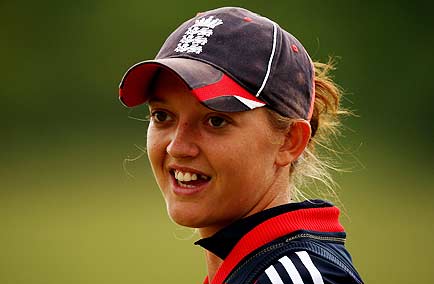 Colombo, Sept 15,  2012: England’s Sarah Taylor has been named ICC Women’s T20I Cricketer of the Year at the LG ICC Awards in Colombo.

During the voting period Taylor played 10 Twenty20 Internationals for England scoring 340 runs at the top of the order at an average of 48.57, while the wicketkeeper also claimed 11 dismissals, including seven stumpings.

The 23-year-old took the accolade ahead of West Indies Stafanie Taylor and Australia’s Alyssa Healy and Lisa Sthalekar.

Taylor was unable to collect her accolade due to preparations in England for the ICC Women’s World Twenty20 Sri Lanka 2012, upon hearing the news of her win, Taylor said: “A massive thank you for this award. I’d like to thank all my team-mates and family for their support and I’m thrilled to have won it and I’m sorry I couldn’t be in Sri Lanka tonight to accept my award.”

The ICC Women’s T20I Cricketer of the Year Award was one of 11 individual prizes given at this year’s LG ICC Awards.

Based on the period between 4 August 2011 and 6 August 2012, the LG ICC Awards 2012 take into account performances by players and officials in a remarkable period for the game.

For all the individual awards (with the exceptions of the Spirit of Cricket Award and the Umpire of the Year), a long-list compiled by the selection panel was forwarded to a 32-person Voting Academy made up of former players, respected members of the media, an elite umpire and an elite match referee. They voted on a three, two, one basis (with three being the highest value) and the winners emerged.