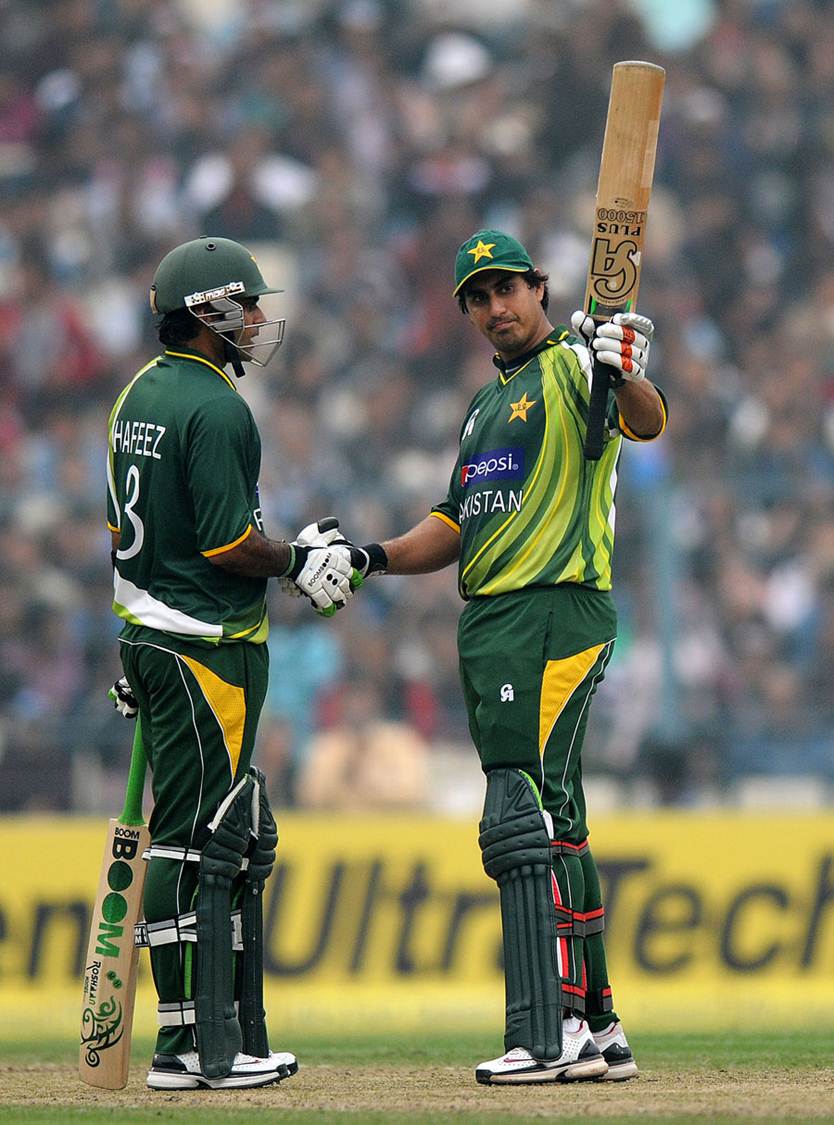 Dubai, Jan 07, 2013: Pakistan opener Nasir Jamshed has made the biggest move in the latestReliance ICC Player Rankings for ODI batsmen. The latest rankings were released today, a day after the conclusion of the three-ODI series between traditional rivalsIndia and Pakistan.

Nasir has jumped 45 places to 31st spot, while India captain Mahendra Singh Dhoni has returned to the top five after putting up a consistent performance with the bat in the series, which was won by Pakistan by 2-1. In the Reliance ICC Player Rankings for ODI bowlers, Pakistan’s duo of Saeed Ajmal and Junaid Khan have also made gains, while Mohammad Hafeez has now become the number-one ranked ODI all-rounder for the first time in his career.

Nasir Jamshed was the top run-getter on either side with 241 runs, which included back-to-back centuries in Chennai and Kolkata. Nasir’s exploits with the bat fetched him the Player of the Series award, and he achieved a career best ratings of 588 to reach 31st position.

Dhoni’s 203 runs from the three games have helped him move up two places to fourth in the batting table. Other batsmen to make upward movements include Suresh Raina in 26th (up by one) and Shoaib Malik in 78th (up by two), while Yuvraj Singh has re-entered the rankings in 41st position.

The batting table is still headed by South Africa’s Hashim Amla followed by teammate AB de Villiers in second place, with Virat Kohli moving down a place to third.

The three-match ODI series was the first series between the Asian neighbours in five years. Sunday’s match in New Delhi, which was won by India by 10 runs, was watched by ICC Chief Executive David Richardson, who was thrilled with the match. He later said: “We must praise the Board of Control for Cricket in India (BCCI) for making room in a very tight schedule to accommodate these iconic fixtures.

“There is no doubt that there is something special about the atmosphere when India and Pakistan meet and I am sure both the BCCI and the Pakistan Cricket Board (PCB) will do their best to ensure that these games remain, where possible, an integral part of the cricketing calendar in the years ahead.

“Like me, I am sure that many millions of cricket lovers across the world enjoyed watching an outstanding standard of intense and competitive international cricket played in the right spirit in front of passionate crowds who packed some of India’s most famous grounds. Congratulations are due to both sides.”

Number-one ranked bowler Saeed Ajmal scalped eight wickets in the series at an average of 10.75, which has helped him achieve career-best rating of 801 points. Saeed has now became the third Pakistan bowler after Wasim Akram and Saqlain Mushtaq to break the 800-point barrier, which in ranking terms is the benchmark for top bowlers. Saeed’s 801 points has put him in joint 25th position along with West Indies’ Courtney Walsh in theReliance ICC Best-Ever ODI Ratings.

Pakistan paceman Junaid Khan, who was the joint-highest wicket-taker with Saeed with eight scalps, has been served with a rise of 62 places to 55th, which has helped him achieve his career-best rating of 466 during the series.

Also moving up is India paceman Ishant Sharma, who has jumped 24 places to 72nd.

Meanwhile, Pakistan’s Mohammad Hafeez has claimed the number-one spot in the Reliance ICC Player Rankings for ODI all-rounders following his combined effort with the bat and the ball during the series. Hafeez struck 97 runs with the bat and took three wickets during the series. Hafeez has moved up three places to 36th in the batting table and has also retained his second rank in the bowlers’ table.

India’s Ravindra Jadeja has also climbed two places to seventh in the all-rounders’ list. The left-hander has moved up one place to 70th in the batting list and has also lifted 11 places to 23rd in the bowlers’ table.

India, which had had an opportunity to leapfrog number-one ranked England and number-two ranked South Africa had it won all the three matches, has finished on 117 ratings points after dropping three ratings points. However, India still has a chance to reclaim the number-one ranking if it beats England 4-1 or better in the forthcoming series that starts in Rajkot on Friday 11 January.

Build-up to the ICC Champions Trophy 2013

This series served as a curtain-raiser to a mouth-watering clash between the two sides in the ICC Champions Trophy 2013, which will be held in England and Wales from 6-23 June. The two sides will go head-to-head on Saturday 15 June in a Group B match in what will be the final edition of the event.

Other sides in Group B of the ICC Champions Trophy are 1998 winner South Africa and 2004 champion West Indies. The tournament opener will feature the two former winners when South Africa, takes on the 2002 champion India in Cardiff on 6 June. The following day, the West Indies will face Pakistan at The Oval.

Group A includes defending champion Australia, 2000 winner New Zealand and 2002 champion Sri Lanka, along with host England which reached the final when it last staged the event in 2004.

The semi-finals of the ICC Champions Trophy will be staged at The Oval (19 June) and in Cardiff (20 June) while Edgbaston will be the venue of the final, to be played on 23 June. —- ICC

View all posts by: Abdul Rahim
One Response to “Nasir move in the Reliance Player Rankings”