London, May 30, 2017: South Africa was always going to be one of the sides to watch in the ICC Champions Trophy 2017 but its profile got another boost with pace bowler Kagiso Rabada moving up four places to take the top spot in the MRF Tyres ICC Player Rankings for ODI Bowlers. 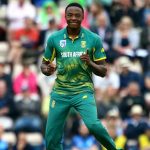 Top-ranked South Africa lost its three-match series to England 2-1 but former ICC U19 World Cup star Rabada’s haul of four for 39 in the final match at Lord’s on Monday helped him finish the series with seven wickets and become the youngest number-one bowler since Pakistan’s Saqlain Mushtaq in 1998.

Rabada, just five days past his 22nd birthday, has displaced his compatriot Imran Tahir whom he leads by two points. With captain AB de Villiers top-ranked among batsmen, South Africa now has the top two bowlers as well as four players in the top 10 of the MRF Tyres ICC Player Rankings for ODI Batsmen – Quinton de Kock (fourth), Faf du Plessis (sixth) and Hashim Amla (10th) being the others.

The intense competition in the individual rankings justifies the tournament’s name as players from the eight participating teams feature prominently in it and not much separates the top players in the fray.

South Africa, India and England have four batsmen each inside the top 20 with New Zealand (three), Australia and Pakistan (two each) also having significant presence. Similarly, among bowlers, Bangladesh and England have three each inside the top 20, followed by New Zealand, South Africa and Australia with two each. In the all-rounders’ list led by Bangladesh’s Shakib Al Hasan, there are three players from England in the top 10.

England’s series win over South Africa, which helped it gain two points, also reflects the close competition that can be expected in a crisp tournament like the ICC Champions Trophy.

For example, Australia and India could overtake South Africa by the next rankings update if they win all their three league matches and South Africa loses all its three matches.

South Africa, Australia, India and New Zealand have all won this prestigious tournament in the past while last time’s finalist England will be hoping to do one better in home conditions and with the confidence of the series win over South Africa.

The tournament, which runs from 1-18 June, also gives an opportunity to teams like Bangladesh, Sri Lanka and Pakistan to consolidate their positions in the MRF Tyres ICC ODI Team Rankings as England and the seven other top-ranked sides gain direct qualification berths to the ICC Cricket World Cup 2019.

Both Bangladesh and Sri Lanka are on 93 points and eighth-ranked Pakistan on 88 points, giving these teams a chance to gain more points by upsetting better-ranked sides since the rankings are weighted to reflect the difference in points.

Meanwhile, other players to gain in the rankings after the England-South Africa series include Quinton de Kock (up two places to fourth) and Eoin Morgan (up five places to 17th) among batsmen and Liam Plunkett (up seven places to 16th) among bowlers.