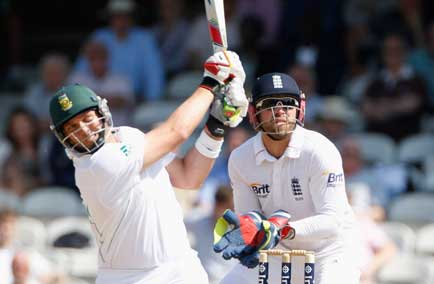 Dubai, July 25, 2012: Jacques Kallis leads the charge of South Africa’s batsmen up the Reliance ICC Player Rankings for Test batsmen after his side’s stunning innings and 12-run victory in the first Test match at The Oval against England that concluded yesterday (23 July).

Hashim Amla’s reward for his unbeaten 311, which was South Africa’s highest ever individual Test score, was not only the man of the match award but also a jump of three places in the batting rankings. His overall rating of 872 is a career best to date for Amla – just two behind second-placed Kallis. Graeme Smith, South Africa’s captain, moved up four places after his 131 in South Africa’s mammoth 637-2 declared.

Smith is sixth in the batting table with AB de Villiers, who did not bat at The Oval, dropping to fifth because of the moves by Amla and Kallis. Sri Lanka’s Kumar Sangakarra remains the top ranked batsman and the only scant consolation for England was that Alastair Cook moved up one place to eighth –courtesy of his first innings 115.

In the Reliance ICC Player Rankings for Test bowling Dale Steyn’s seven-wicket haul in the match – including a second innings 5-56 – confirmed his ranking as the top bowler and edged him ever closer to the magical 900 point mark . He stands now on 896 – just six short of his career best mark of 902 achieved against Sri Lanka at Centurion in 2011.

Team-mate Morne Morkel, who claimed four England first innings wickets, rises four places to join Ben Hilfenhaus in sixth place while there was a rise of one spot by Vernon Philander, who has achieved a career best rating to now occupy fourth place. Further down the table, Imran Tahir went up two places to 59th.

All England’s bowlers, who toiled for 189 overs for just two South Africa wickets, lost ground in the rankings. James Anderson has dropped down two to fifth; Stuart Broad down three to ninth; Tim Bresnan down one place to 15th while Graeme Swann’s slide of three places took him outside the top 10 for the first time since August 2009, he now occupies 11th. —- ICC