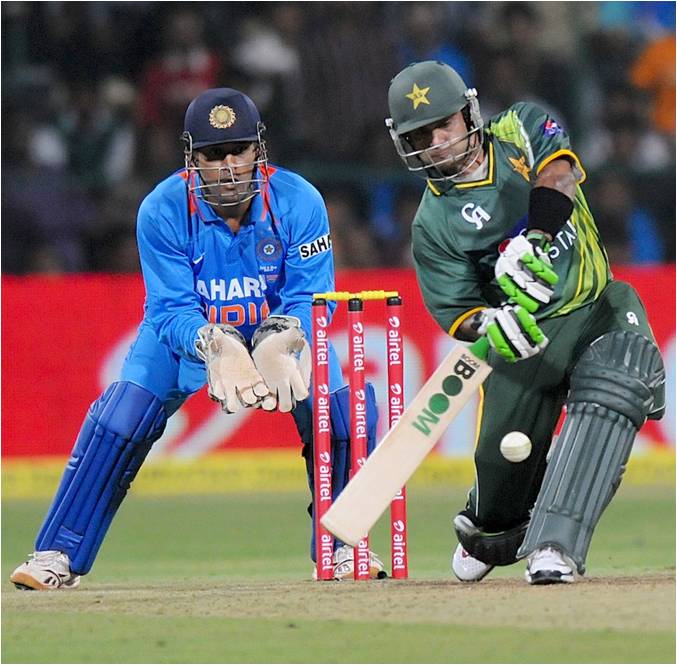 Bangalore – India, Dec 25: Two of Pakistan’s experienced hands guided them to victory in their first game in almost three months, and their first bilateral tour of India in five years. An early burst from debutant Bhuvneshwar Kumar, who began his international career with a fabulous display of swing bowling, rattled the Pakistan top order but the calm presence of Mohammad Hafeez and some enterprising batting from Shoaib Malik put a chase of 134 back on track.

Pakistan had another scare at the death, losing two in quick time when victory appeared secure, but Malik ultimately saw them through in the final over, sealing the game with a six. The hosts were a specialist bowler short, as the Pakistan pair targeted the non-regulars, but a more significant factor in India’s loss was their implosion with the bat, when they lost nine wickets for 47 runs in 46 balls.

A 36,000-strong crowd had been silenced during an impressive display of bowling backed up by some excellent ground fielding that had helped Pakistan fight back after India’s openers had laid a strong foundation in an attractive stand of 77 in under 11 overs. The decibel levels at the Chinnaswamy Stadium, however, hit their peak when Bhuvneshwar swung it this way and that, setting up two of this three victims with out swingers before nipping one back in to dismantle the stumps. At 12 for 3, Pakistan were reeling; their rebuilding was steady, and resulted in 24 boundary-less deliveries, but Hafeez and Malik pounced in at the right time.

Virat Kohli was one of the part-timers used by India, and Hafeez slogged him for two boundaries in the 11th over, at the start of which the required-rate had hit almost nine an over. Yuvraj Singh dragged the ball too short on occasion and was heaved for two sixes by the pair and they each stepped out to Ravindra Jadeja to dispatch him for maximums over his head.

The return of India’s seamers didn’t immediately check Pakistan, as the equation was brought down to 16 off the last three overs, but Ishant Sharma dismissed Hafeez and conceded just two in an over in which he had Malik caught off a no-ball for height. Ashok Dinda was given the penultimate over and he left Pakistan needing 10 off the last, which Malik helped achieve with a straight six off a Jadeja length delivery to win with two balls to spare.

Ajinkya Rahane’s supreme timing was the feature of India’s opening partnership, as he lofted Pakistan’s bowlers over extra cover effortlessly, though they hit back after he fell upper-cutting to third man. Umar Gul and Saeed Ajmal were the architects of that comeback, after being struck for sixes in their respective opening overs. Gul was smashed over midwicket by Gambhir, but had Yuvraj Singh caught in the deep off a slower ball in his new spell before removing two in two towards the death. Ajmal was carted over extra cover by Rahane, but returned to dismiss MS Dhoni and Suresh Raina with quicker deliveries at a time when India would have backed themselves to reach a score of around or above 150.

Gambhir had started picking up the pace but was caught short of the crease when attempting a second run in the 13th over. Sohail Tanvir returned a throw on the half-volley to Kamran Akmal, who collected well and dislodged the stumps. Kohli and Yuvraj began well but fell trying to heave the seamers over square leg – left-arm fast bowler Mohammad Irfan got rid of Kohli to bag his first international wicket.

Ajmal’s tricks against Dhoni and Raina, and the early run-out of Rohit Sharma, sent back by a direct hit from the deep, transformed India’s game from one aimed at an aggressive charge to mere survival. India scored just one boundary in the last six overs, their early advantage was squandered and not even a dream debut that produced a spell of 4-0-9-3 could restore it completely. —- By Siddhartha Talya, ESPN/Image © BCCI