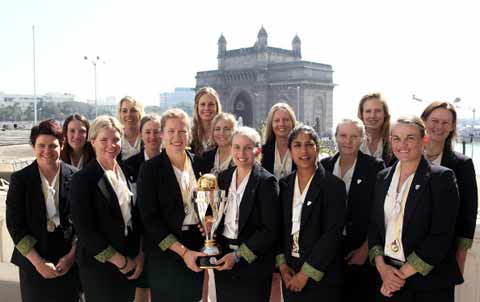 Mumbai – India, Feb 17, 2013: Australia marched its way into Women’s World Cup history tonight as the side won a record sixth ICC Women’s World Cup title after it beat West Indies by 114 runs in front of a vociferous crowd at the Cricket Club of India’s Brabourne Stadium.

Electing to bat first, Australia posted a formidable 259-7 off its 50 overs – the highest score in a 50-over Women’s World Cup final – before dismissing West Indies for just 145 runs.

Meanwhile, New Zealand’s Suzie Bates was declared Player of the Tournament for her 407 runs with three half-centuries and a ton at an average of 67.83. She also took four wickets while captaining her side to a fourth place finish in the tournament.

The final saw the return of Australia’s Ellyse Perry, back from an ankle injury and bowling with all the aggression expected of a fast bowler, taking 3-19 in her 10 overs. The Australian women dominated right from the start never letting the dangerous West Indies batting off the hook.

Perry showed once again why she is one of the top rated bowlers in women’s cricket as she took wickets in the 10th, 12th and 14th overs to have the West Indies 41-3 in the process also claiming the wicket of the dangerous West Indies all-rounder Stafanie Taylor with a spectacular caught and bowled.

Once Taylor was gone, Deandra Dottin was West Indies’ only hope. Dottin threatened briefly hammering two sixes as her first two scoring shots before Lisa Sthalekar dismissed the Barbados native. Sthalekar bowled beautifully to finish with 2-20 in her ten overs.

Earlier, half-centuries from opener Rachael Haynes and Jess Cameron took Australia to a more than respectable 259. Haynes, who has performed well throughout the tournament, continued her merry run on a flat pitch stroking six boundaries in her 74-ball 52.

Cameron was the aggressor, as she put the West Indies bowling to the sword, hammering two sixes and eight fours in a 76-ball 75. The two added 64 for the second wicket after Meg Lanning was dismissed caught at mid-off off Taylor. Lanning made 31 putting on 52 for the first wicket with Haynes in under ten overs. Cameron was later adjudged Player of the Final for her efforts.

At 177-3 after the 35th over, the Australians were looking for a huge score, but the batting Powerplay halted their assault, as they lost three quick wickets for nine runs. When the side lost off-spinner Erin Osborne with the score reading 209-7 in the 44th over, it was looking like the West Indies potentially had Australia on the back foot.

However, captain Jodie Field (36 not out off 38 balls) and Ellyse Perry (25 not out off 22 balls) had other plans and the pair put on a quick-fire 50-run partnership for the eighth wicket to resurrect the innings and steer it to a respectable 259-7.

Fields said that the Aussies went into the final with an aggressive intent. “I was very disappointed with performance in the Super Six stage against West Indies. We really going wanted to go into that match and dominate and go through the tournament undefeated. But credit to West Indies, they played well in that match. We knew we had to step it up at bit and prove our game and, to the team’s credit, they did that,” said the 28-year-old.

The Australian men’s team has won four ICC World Cup titles, while this was the sixth title for the women’s team. “It feels good to be one up on the men sometimes. But they have always supported us throughout the tournament,” said Fields.

Fields, who also led the team to the ICC World Twenty20 crown in Sri Lanka a few months back, said the World Cup effort was a culmination of four years of hard work: “In the ICC Women’s World Cup 2009 played in Australia, we were really disappointed to not do well.

“In the last four years there has been a big effort by not only the playing group, but also the support staff. To Cricket Australia’s credit that they ensured that when we turned up to the World Cup, we were in the best shape possible and to everyone credit, we proved why we are the number one team in the world,” said Fields.

West Indies captain Merissa Aguilleira blamed the poor batting show for the loss. “Batting has been the downfall for us throughout this tournament. We went out there and we didn’t execute well. That was one of the areas, we had to perform today and we couldn’t manage that as planned,” said the 27-year-old from Trinidad.

Aguilleira said despite the loss, West Indies had a lot of positives to look forward to. “Today, we did not go out there and execute, but we have a lot to be thankful for. Before the tournament, we were ranked fifth in the ICC rankings and now we have finished second in the world, it’s a huge achievement. We got to the final for the first time. Deandra and Stafanie played well and so many people got a chance to see what Deandra can do out there as a player, but we know now that there is room for further improvement.”

The player of the tournament, Suzie Bates, said of her honour: “It was tough to be watching the final and not playing in the World Cup final but on a personal point of view, winning a trophy at the end of this tournament is better than receiving nothing at all.

“I’m honoured to have been named the player of the tournament but now it’s time for us to go back to the drawing board as New Zealand cricket and make sure we continue to improve, similar to the rapid progress that West Indies, Sri Lanka and South Africa have made. I still believe New Zealand can achieve great things despite finishing fourth here in India.”