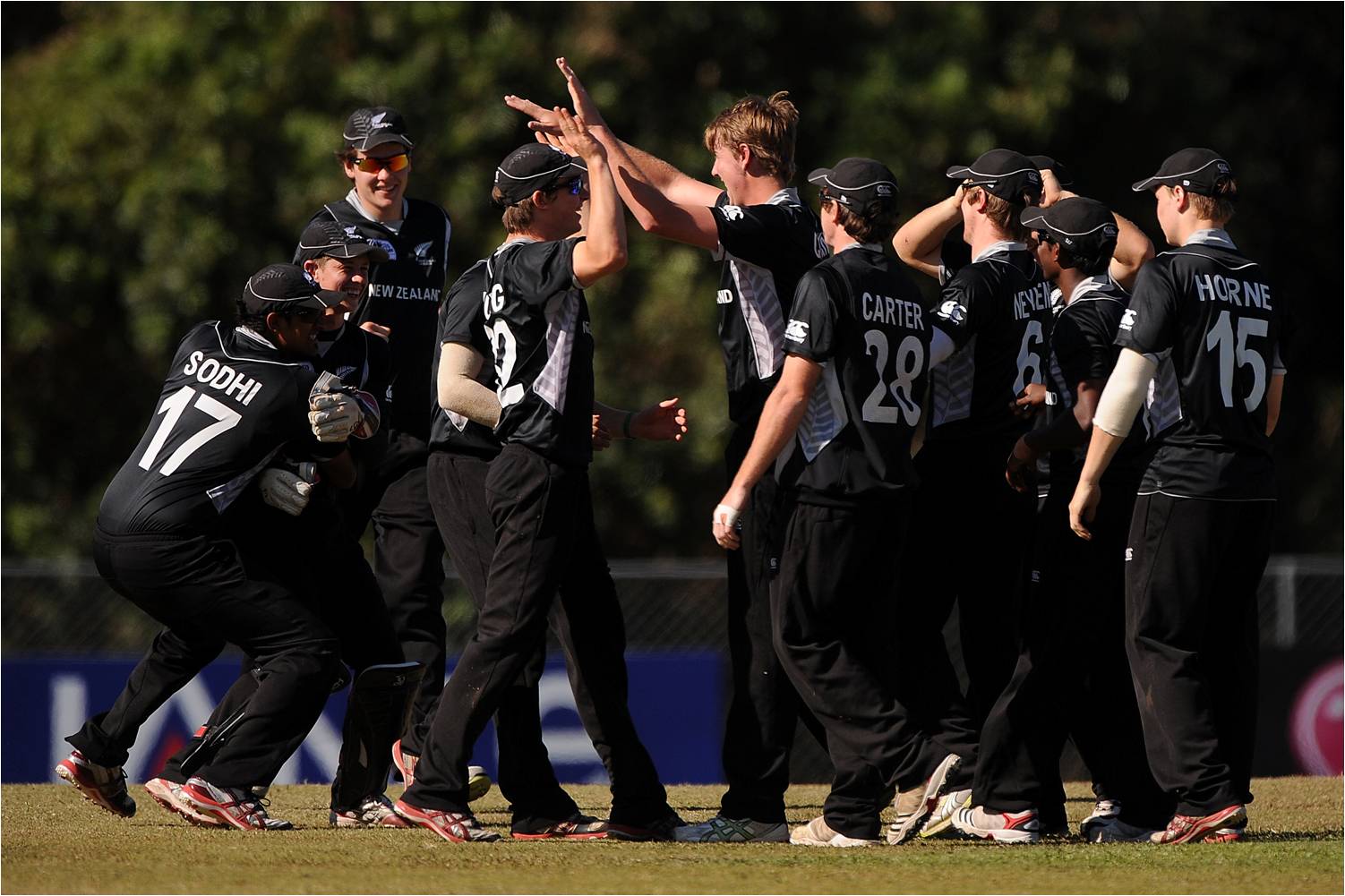 Brisbane – Australia, August 14, 2012: Defending champion Australia sealed in a place in the Super League quarter-final of the ICC U19 Cricket World Cup 2012 from Group A after registering a six-wicket victory over Ireland at Endeavour Park 2 in Townsville on Monday.

Australia bowlers Alex Gregory (three for 13), Shane Cassell (three for 24) and Gurinder Sandhu (two for 35) shared wickets between them as Ireland was skittled out for 129 in 42.5 overs after electing to bat first. In turn, captain Will Bosisto (36 not out) and Sam Hain (26 not out) put on 59 runs for the unbroken fifth wicket partnership as Australia achieved the target with just under 10 overs to spare.

It was Australia’s third successive victory, which meant it is assured of a place in the last eight stage of the tournament which will be played in Townsville and will start on 19 August. The top two sides from all the four groups qualify for the Super League quarter-finals while the bottom two sides complete in the Plate Championship.

The winner of Thursday’s match between England and Nepal, which will be played at Tony Ireland Stadium in front of ESPN STAR Sports’ HD cameras, will confirm which other side joins Australia from Group A in the quarter-final stage.

In the other matches of the day, two-time former champion India defeated Zimbabwe by 63 runs despite Malcolm Lake’s 118 at Tony Ireland Stadium while South Africa’s Quinton de Kock (126) and Chad Bowes (115) smashed entertaining centuries to inspire their side to a thumping 209 runs victory over Namibia at John Blanck Oval in Brisbane.

Qualifier Afghanistan came desperately close to pulling off the first major upset of the tournament but fell just nine runs short of victory after being restricted for 190 for nine while chasing New Zealand’s 198.

At 26 for five, an early finish loomed large for Afghanistan before they mustered a dogged lower order fight back that saw them need 17 runs from the final over. New Zealand’s fast bowler Matthew Quinn, later declared the player of the match, bowled the final over and conceded just eight runs to clinch a tense win for his side.

Quinn finished with figures of four for 26, finishing off the good work that he and new ball partner Jacob Duffy (four for 40) had started at the beginning of the innings.

Earlier, Afghanistan’s left-arm paceman Sayed Shirzad and right-arm quick Yamin Ahmadzai equally shared eight wickets between them as New Zealand was bowled out for 198. Shirzad finished with four for 34 while Ahmadzai bagged four for 35 from 10 overs.

India bounces back with victory against Zimbabwe

India bounced back from Sunday’s loss to the West Indies with a 68-run victory over Zimbabwe, despite a courageous century by all-rounder Malcolm Lake. Lake clubbed 10 fours and five sixes in a 107-ball knock but his side was still dismissed for 198 after being set a 262 run target by India.

India’s right-armed medium-pacer Kamal Passi was outstanding with the ball, ripping through Zimbabwe’s top order and ended with figures of 8-1-23-6 which later earned him the player of the match award.

Lake said this performance was up there with the best he has batted. “I was excited about the hundred but just sad we couldn’t get it over the line,” he said.

Zimbabwe coach Chris Harris said he had worked with Lake for a number of years. “As your saw today he is a tremendous striker of the ball and I have always seen him as a match winner.

“He is a very good all-rounder, what helped him a little bit today was that he bowled very well and put together a very good spell for us which helped keep us in the game and from that he gained some confidence with the bat,” he said.

Earlier, India openers Prashant Chopra and captain Unmukt Chand provided their side a solid 139-run start. The middle-order batsmen made full use of the platform provided by the openers to help India finish at 261 for six in 50 overs.

Chand top scored with 78 (85b, 9×4, 3×6) while other notable batsmen were Chopra who scored 57 and Hanuman Vihari with 31 while for Zimbabwe Campbell Light finished with figures of three for 22 from seven overs.

South Africa all-rounder Theunis de Bruyn later picked up four wickets for 20 with his off-spinners to dismiss the qualifiers for 137.

Bowes said they had set out to deliver a “clinical” performance today against the near neighbours. “We wanted to do everything as well as we could. There are still a few areas to work on with batting and bowling – we could have been a bit more ruthless to finish the game off earlier – but overall it was a solid performance.

“We didn’t want to give them a sniff. It was a case of showing that we mean business in this tournament. It can sometimes be tougher playing against the so-called minnows and the key for us is keeping the standards high and maintaining our intensity,” Bowes said.

Law impressed with his brigade

Australia coach Stuart Law was impressed with the performance of his side which reached the Super League quarter-finals after finishing unbeaten in Group A.

“To bowl a team out before a lunch break is a pretty good effort. We could be a little more conservative with the new ball, but all in all, we are getting early wickets,” he said.

Law said they were taking things one step at a time as they look towards the play offs.

“We will sit down and work out we can improve on from the last two games and hopefully by the time we get to the quarter-finals we will be pretty well tuned,” he added.

Australia’s next match will be a quarter-final Sunday 19 August with their opponents to be confirmed.