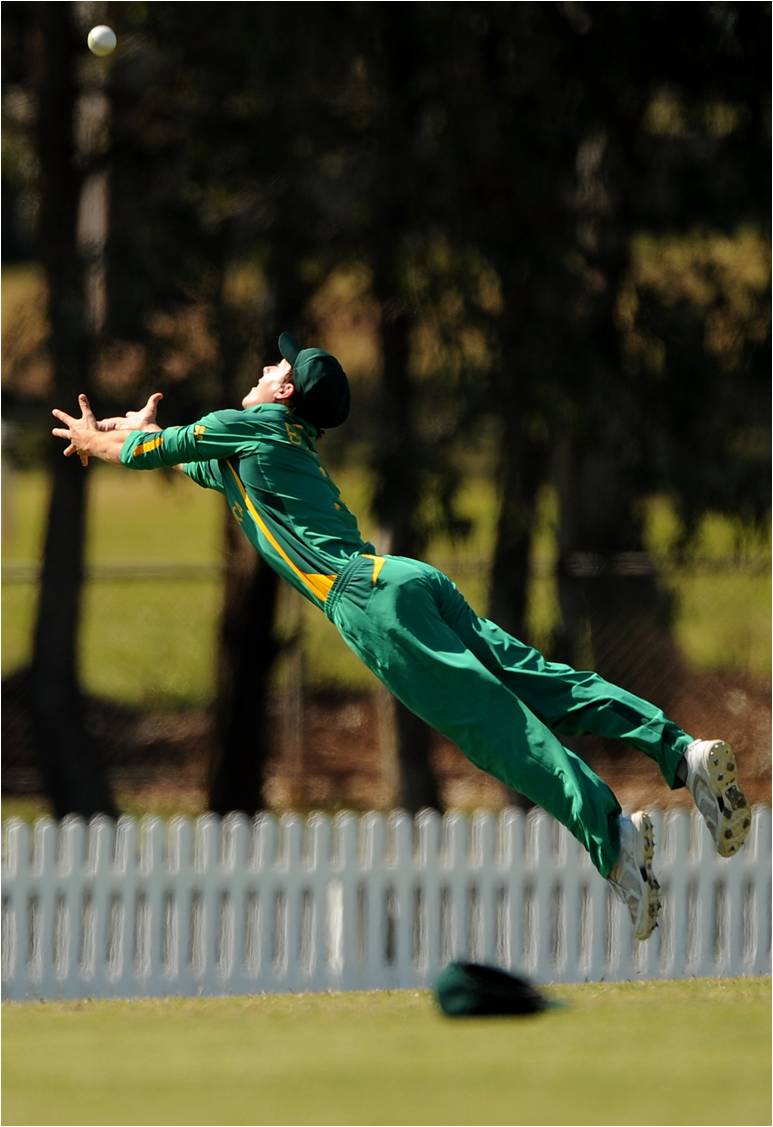 Brisbane – Australia, August 15, 2012: Fourth side, South Africa topped Group D and qualified for the Super League quarter-final of the ICC U19 Cricket World Cup 2012 after defeating Sri Lanka by four wickets in the feature match at Peter Burge Oval in Brisbane on Wednesday.

South Africa bowlers Corne Dry (four for 16), Calvin Savage (two for 30) and Solo Nqweni (two for 51) shared wickets between them to skittle out Sri Lanka for 150 in 37.4 overs. In its reply, captain Chad Bowes (46) and Theunis de Bruyn (42) put on 80 runs for the third wicket as South Africa achieved the target in 33 overs.

It was South Africa’s third successive victory, which means it will now feature in front of ESPN STAR Sports’ HD cameras on the first day of the Super League quarter-finals on 19 August. South Africa’s opponent will only be confirmed after Thursday’s match between England and Nepal. The two sides go head to head at Tony Ireland Stadium in the day’s only match to be televised live by ESPN STAR Sports.

The other matches of the day saw close finishes, with Ireland getting the better of Nepal in Group A by 14 runs at the Endeavour Park in Townsville, and Afghanistan holding its nerve to beat Scotland by 10 runs at the John Blanck Oval in Group B.

Thursday is the final day of the first round matches, and the winner of New Zealand-Pakistan match at John Blanck Oval will confirm which side tops Group B. Both the sides have already qualified for the quarter-finals but a win for Pakistan could possibly set up a mouth-watering Super League quarter-final clash against rival India on Monday, 20 August. However, to make this happen, two-time former champion India will also have to beat Papua New Guinea (PNG) in a Group C fixture at Endeavour Park 1.

South Africa’s convincing victory over Sri Lanka has provided Bangladesh with an opportunity to qualify for the Super League quarter-final as it plays a winless Namibia at the Peter Burge Oval. If Bangladesh wins, it will mean Sri Lanka will participate in the Plate Championship, because the top two sides from all the four groups qualify for the Super League quarter-finals. The bottom two sides compete in the Plate Championship.

South Africa on Wednesday showed it can no longer fly under the radar at the ICC Cricket U19 Cricket World Cup, with a comprehensive victory to go top of Group D.

South Africa bundled Sri Lanka out for 150 in 37.4 overs and then overcame the loss of early wickets to finish with 153 for six in 33 overs to remain unbeaten. Sri Lanka would have been in worse trouble but for a fighting 50 not out (60b, 4×4, 2×6) from 19-year-old all-rounder Pulina Tharanga and a generous 31 extras from South Africa. Tharanga, who was orphaned by the 2004 tsunami that devastated parts of Sri Lanka, was easily the highest scorer, with the next best being Lahiru Madushanka’s 19. South Africa paceman Corne Dry led the charge for the Proteas, claiming player of the match honours for his haul of four for 16 from eight overs, with two maidens.

Dry revealed that the South Africans had set themselves to finish the preliminary rounds on top of the Group.

“We knew once we beat Bangladesh that we were a good chance of doing that and obviously Sri Lanka was the other big game we focussed on. Today was another clinical effort and as a group, it felt good,” he said.

South Africa will now travel to Townsville to play on Sunday at Tony Ireland Stadium against the second placed team from Group A, which is currently England.

Ireland took its first points on Wednesday with an exciting 14-run win over Nepal at Endeavour Park in Townsville. Ireland captain George Dockrell led by example, with his left-arm spin claiming four for 22 from 10 overs, including three maidens, as Nepal’s run chase was stifled in its pursuit of Ireland’s 185 for eight from 50 overs. Dockrell was named player of the match, with his captaincy skills also coming to the fore. Nepal recovered from a shaky 69 for five to base its chase around a feisty 32 from Rahul Vishwakarma and 29 from Pradeep Airee. But it was not enough to get ahead of the asking rate, with Nepal being bowled out for 171 in the final over. The win put Ireland in third position in the Group.

In the other clash of the qualifiers, Afghanistan came out on the right side with a 10-run win over Scotland on the Sunshine Coast. Captain Javed Ahmadi (71: 76b, 8×4, 1×6) laid the foundation for Afghanistan’s competitive total of 191. Afghanistan wicket-keeper Afsar Khan (44: 63b, 3×4) then steered the side after it was struggling at 132 for seven. Scotland paceman Gavin Main finished with four for 26 from eight overs while fellow seamer Ruaidhri Smith took four for 45 from his 10 overs.

For Scotland, opener Ross Maclean (67: 109b, 4×4) played a lone hand. Afghanistan’s pace duo of Sayed Shirzad (three for 33) and Aftab Alam (two for 45) ran through the Scotland line-up. Both Scotland and Afghanistan will now head into the Plate Championship.