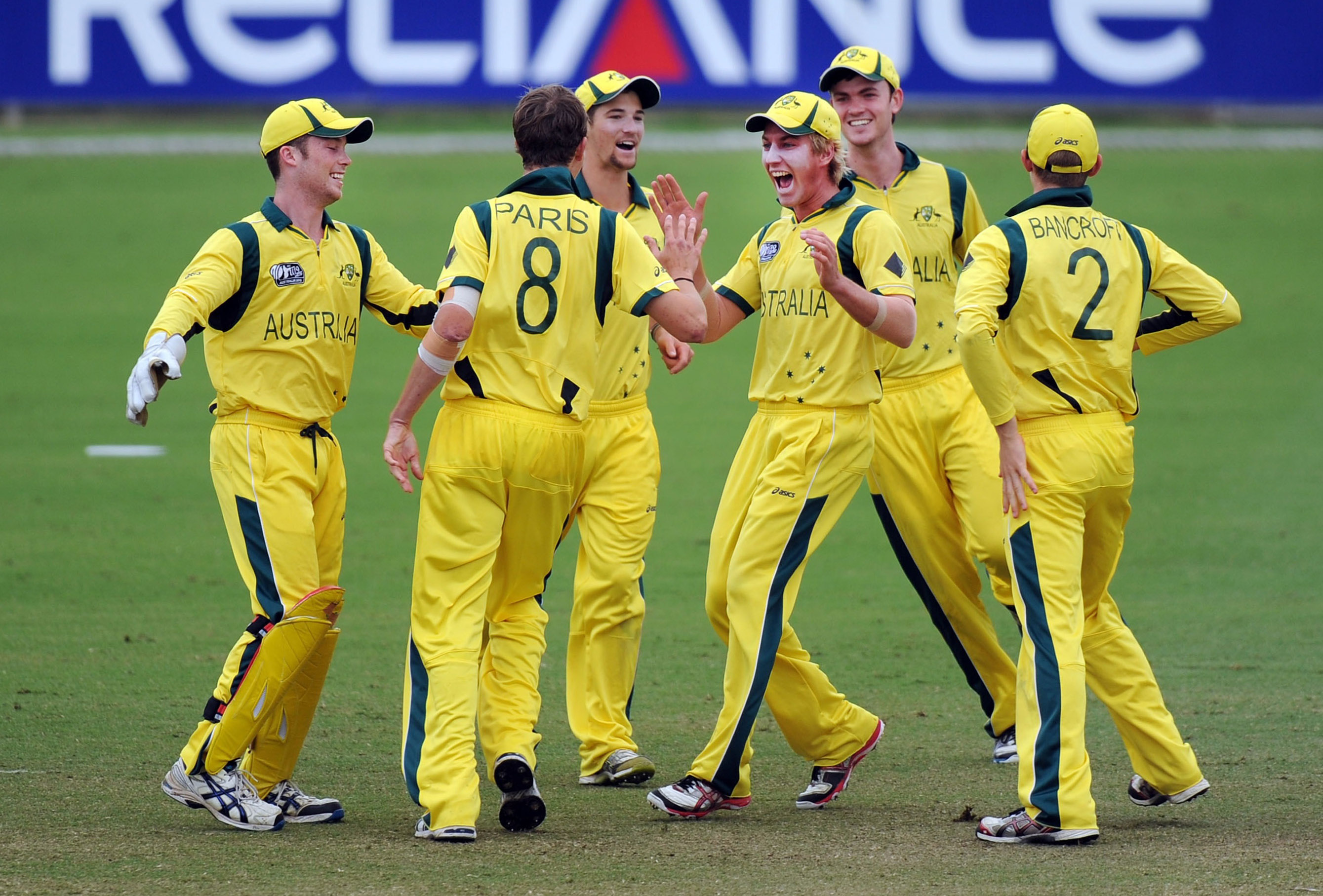 Brisbane, August 21, 2012: Australia took a huge stride in its quest for its fourth ICC Under-19 Cricket World Cup title on Tuesday when it became the first side to seal a place in the final, after defeating South Africa by four wickets at the Tony Ireland Stadium.

The final is scheduled to be played on Sunday 26 August and Australia will now wait for the winner of Thursday’s second semi-final between India and New Zealand to know its opponent. The loser of Thursday’s semi-final will meet South Africa in the third-fourth position play-off on Saturday 25 August.

Australia opener Cameron Bancroft was the star of his side when he scored a fine 66 and featured in a match-winning 95-run third wicket partnership with Kurtis Patterson (46) after the defending champion had slipped to three for two in two overs in its run-chase. Bancroft, who faced 133 balls and hit five fours and a six during his nearly three-hour vigil at the crease was declared player of the match.

Australia, which is also bidding to become the second side after Pakistan to win back-to-back titles, made a good start to the day when Will Bosisto won an important toss and elected to bowl in overcast conditions in Townsville. Joel Paris and Mark Steketee both struck early with the new ball to remove South Africa’s in-form Quinton de Kock (one) and Gihahn Cloete (zero). Steketee returned for his second spell and took the crucial wicket of South Africa captain Chad Bowes (46: 104b, 1×4, 1×6) who had struck up a handy partnership of 88 with Murray Coetzee.

Coetzee (50:76b, 3×4) went on to make his second half-century of the tournament before he was run-out with a direct hit by Ashton Turner. Gurinder Sandhu maintained a good line and length in the morning, ending with the tidy figures of two for 23 from ten overs, featuring three maidens. Steketee claimed three for 35 from his ten overs.

In reply, Australia lost the early wickets of James Peirson and Meyrick Buchanan to be in strife at two for three.

However, Bancroft and Patterson both soaked up the occasion and repaired the damage before Patterson was caught behind by de Kock for 49 (71b, 7×4).

Bosisto once again showed his class at the crease as he and Bancroft chipped away for a fourth wicket stand of 75 before Bancroft was run out for 66 (133b,5×4, 1×6). Bosisto looked likely to take Australia through to the win but he was run-out by Theunis de Bruyn for 40 (85b, 2×4) as the home side slipped from 173 for three to 188 for six, before Turner hit a four through extra cover to seal the victory for his side.

A brilliant century by Litton Das, who also featured in a 113-run second wicket stand with captain Amanul Haque, went in vain as England defeated Bangladesh by four wickets at Endeavour Park 2. The victory meant England will play the winner of the Pakistan-West Indies match in the fifth-sixth position play-off on Friday 24 August.

Batting first, Bangladesh was cruising at 122 for one in the 27th over before it choked for the second successive time and finished on 217 for seven, with the last 22 overs producing just 95 runs. Litton hit nine fours and a six in a 134-ball 102 while Amanul maintained his fine form to score 56 off 80 balls with eight fours. Amanul now has scored 237 runs in five matches and is the third leading run-getter in the tournament. England’s lanky left-arm fast bowler Reece Topley was the most impressive bowler, with figures of 10-0-32-5.

In turn, even contributions by Ben Foakes (47), Sam Wood (46), Adam Ball (34 not out) and Aneesh Kapil (33 not out) ensured England crossed the finish-line with 10 balls and four wickets to spare. Topley, who now leads the wicket-takers’ list with 16 wickets, was adjudged player of the match.