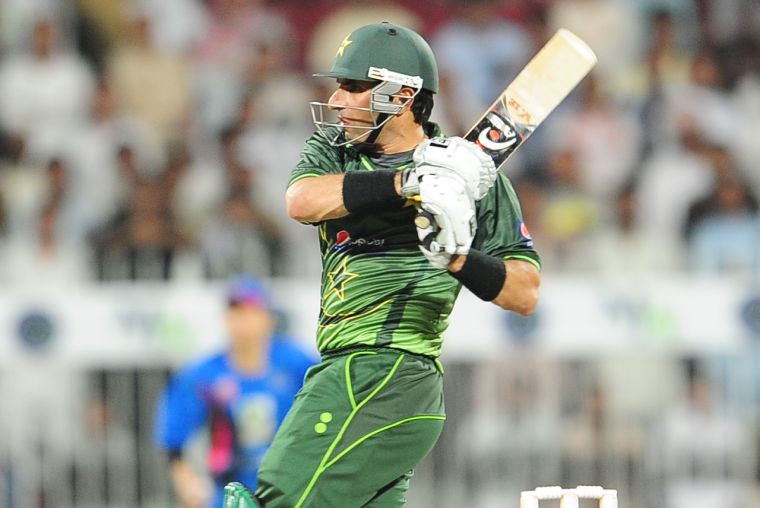 BY: TFE, March 15, 2012: Pakistan defeated Sri Lanka by six wickets Thursday to virtually book their place in the final of the Asia Cup 2012 one-day tournament in Dhaka, reports AFP.

Skipper Misbah-ul-Haq (72 not out) and Umar Akmal (77) hit half-centuries as Pakistan achieved a 189-run target with more than 10 overs to spare in the day-night match. Earlier, Aizaz Cheema and Saeed Ajmal shared seven wickets as Pakistan dismissed Sri Lanka for 188 in Dhaka in the Asia Cup tournament Thursday, despite half-centuries from Kumar Sangakkara and Upul Tharanga.

Fast bowler Cheema finished with 4-43 and off-spinner Ajmal with 3-27 as Sri Lanka were bowled out in the 46th over after electing to bat in the day-night match in Dhaka. Sri Lanka were well-placed at 161-4 following a 96-run fifth wicket stand between former skipper Sangakkara (71) and Tharanga (57), before losing their last six wickets for 27 runs.

Ajmal started the slide when he bowled Tharanga and then removed Farveez Maharoof and last-man Suranga Lakmal. Cheema, who conceded 21 runs in his first two overs, came back strongly to dismiss openers Mahela Jayawardene (12) and Tillakaratne Dilshan (20) in quick succession before removing Sangakkara and Lasith Malinga.

The Pakistani bowlers were backed by their fielders, with Younis Khan taking a superb catch to his left in the slips to account for Dinesh Chandimal off Gul. Sri Lanka raced to 33 in the opening five overs before they were reduced to 65-4, with Cheema taking two wickets and Gul and Hammad Azam one apiece.

Pakistan defeated Bangladesh by 21 runs and India beat Sri Lanka by 50 runs in their opening matches. Each side will play the other once in the round-robin league, with the top two advancing to the final on March 22.