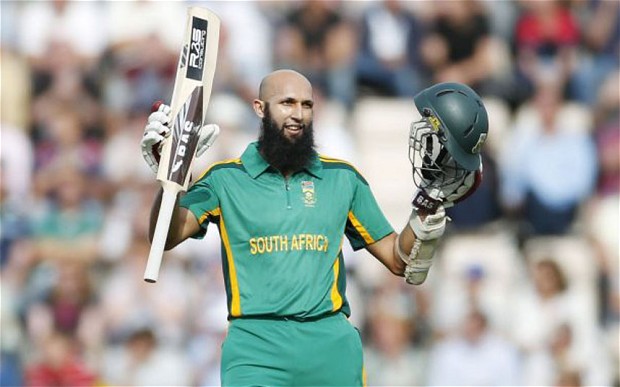 Dubai, Jan 15, 2013: South Africa batsman Hashim Amla has moved within striking distance of claiming the number-one ranking on the Reliance ICC Test Player Rankings for batsmen for the first time in his career.

Amla stroked 110 in the Port Elizabeth Test and earned eight rating points which, in turn, has helped him achieve a career-best 886 ratings points.

The two other centurions of the Port Elizabeth Test, Faf du Plessis and Dean Elgar, have also moved up in the latest batting rankings. Du Plessis is now 38th (up by five) and Dean Elgar is now at 96th (up by 49).

New Zealand’s Dean Brownlie in 43rd (up by three) and BJ Watling in 56th (up by 22) are the others batsmen to make notable upward movements.

The bowlers’ table is still headed by Dale Steyn, who has further consolidated his lead at the top after spells of five for 17 and three for 48 that also fetched him the Player of the Match award in the second Test.

Steyn has opened up 45 ratings points gap with team-mate and second-ranked Vernon Philander, who lost one per cent of his ratings point for missing the second Test due to injury.

The other bowlers to make upward movements include New Zealand’s fast bowler Doug Bracewell in 37th (up by one) and South Africa duo of Robin Peterson in 50th (up by 15) and Rory Kleinveldt in 74th (up by 17).

A 2-0 series win over New Zealand has earned South Africa one ratings point and has lifted it to 124 ratings points, while opening a six-point lead against second-ranked England.

South Africa now has three more Tests before the 1 April cut-off date for the awarding of the ICC Test Championship mace and prize money for the top-ranked Test team. These three Tests are against Pakistan, and will be played next month in Johannesburg, Cape Town and Centurion. The Proteas will need to win the series to be guaranteed number-one spot at the cut-off date for the first time, irrespective of how the three other series pan out. India hosts Australia for a four-match series from 22 February, New Zealand plays the first of a three-match series against England on 6 March in Dunedin, and West Indies plays Zimbabwe in the first of a two-match series on 16 March.

This would mean South Africa will get richer by US$450,000 and will also retain the prestigious Reliance ICC Test Championship mace.

A total of US $3.8m in prize money will be shared among the top four sides on 1 April 2013, 2014 and 2015, after the ICC Board approved a proposal earlier this year to substantially increase incentives in the form of prize money to promote Test cricket in the period leading up to the ICC Test Championship event in 2017.