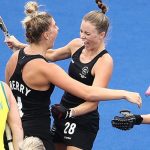 The Black Sticks, with Stacey Michelsen and Anita McLaren showing the way, never let up after leading 1-0 at halftime, to improve on their silver medal from the Delhi 2010 Commonwealth Games and bronzes at Kuala Lumpur 1998 and Glasgow 2014.

Australia’s Jodie Kenny scored the goal for the defending champions in the final period but the young and inexperienced Australian team was no match for the Black Sticks. It ended Australia’s run of three successive Commonwealth Games gold medals in women’s hockey.

England took the bronze with a comfortable 6-0 victory over India.

The GC2018 hockey competition concludes with a repeat program in the men’s competition with England facing India in the bronze medal match, and Australia taking on New Zealand for gold. —- GC2018