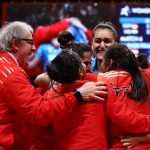 The Indian team made up of Manika BATRA, Madhurika PATKAR & Mouma DAS have sensationally broken Singapore’s streak that dated back to 2002, which had resulted in the Singapore women’s team pocketing every women’s team gold medal on offer.

Given no chance of victory before the match, the Indian team has put together a performance that will put them in Indian sporting history books for life and captivated the massive live TV audience back in India.

BATRA did just that, blowing ZHOU Yihan off the court 11-7, 11-4, 11-7 to clinch India’s first ever women’s Commonwealth Games medal!

After clinching the historic medal BATRA stated: “I was just thinking at 7-all that I had to win, I had to win the medal for India, I wanted to stand on the top step of the podium and have the Indian national anthem played.

I’ve practised a great deal with my coach to attack more from my backhand, the pimpled rubber but I think today the big improvement was my forehand, I think that really surprised Singapore. It’s the first time I’d ever played Feng Tianwei but previously when I played Zhou Yihan I lost.”

England beat Australia in another thrilling match 3-1 to win the bronze medal.