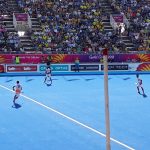 India looked to have the game in its keeping with a 2-1 advantage as the last minute of the match began, but Pakistan cleverly used a video referral to win a penalty corner that was to be taken after the siren.

A scrappy first attempt looked to end the match, but Pakistan called for another review, with the video referee awarding them a repeat penalty corner.

Pakistan 20-year-old Ali MUBASHAR stepped up and rocketed a drag flick into the bottom left-hand corner of the goal, earning his country a vital point.

Indian youngster Dilpreet SINGH scored the opening goal after a well-worked passage of play, before penalty corner specialist Harmanpreet SINGH made it 2-0 to India with a trademark drag flick.

Pakistan got back in the game early in the second half when Muhammad IRFAN JR. tapped in a nice counter-attacking movement, and from there they had all the momentum.

Pakistan midfielder Muhammed RIZWAN was pleased with the team’s effort and expects improvement.

“To come back from 2-0 is a team effort,” he said. “It’s a learning process, as there are lots of new guys, and we’ve only been with our coach for two-and-a-half weeks.”

Two green cards and four yellow cards were issued in what was a spiteful match.

Muhammed RIZWAN (PAK)
On the ill-discipline shown by his side (two yellow cards and one green card):

“In India and Pakistan matches, it happens. The young guys get too emotional. I tell them ‘don’t get the card, that’s bullshit’.”

On the outcome of the game:
“To come back from 2-0 is a team effort. It’s a learning process, as there are lots of new guys, and we’ve only been with our coach for two-and-a-half weeks.”

On the involvement of the crowd:

“The crowd noise is always positive, it feels like home. The crowd is happy to celebrate something good.”

Manpreet SINGH (IND)
On today’s result:
“We are OK, we are not that disappointed. Because we played a drawn match, we still got one point from that.”
On his team receiving two yellow cards during the match:

“It always affects the team when you’re one man down and we need to work on not giving away easy cards in our next match.

“Hockey is a very fast game. If you’re one man down, the other team always gets more chances.” —- GC2018