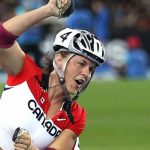 At 47, the Canadian still has plenty left in the tank.

Roy won her fourth Commonwealth Games medal – a bronze – on the track on Tuesday in the T54 1500m and will aim for the podium again in the women’s T54 marathon on Sunday 15 April.

The secret to her enduring success is simple, Roy just really likes racing.

“I did a new Canadian record in the 1500m last year, it was a great race so why not? I still like it, I have the patience.”

After 20 years of international competition, Roy is showing no signs of slowing down, in fact, she keeps getting better.

“The younger athletes are pushing harder, but I still believe I am competitive. Last year I managed to improve my personal best by two seconds in the 1500m,” she said.

“In wheelchair marathon racing, so many athletes are performing well over 40. At the Tokyo Marathon this year, the winner of the men’s race (Hiroyuki Yamamoto) was 51.”

Since 1998, Roy has competed in every Paralympic Games, Commonwealth Games and world championship.

It’s an impressive list of achievements, but GC2018 – likely her last Games, Roy said – will be memorable, even if she doesn’t finish Sunday’s marathon with a medal.

Roy’s three-year-old son, Emile, was at Carrara Stadium to cheer her on in the T54 1500m, where Roy won bronze and lowered the Games record she set in Glasgow.

“When he sees the races he gets excited,” she said.

“He is just happy to see us pushing because he has seen this since he was small, but I don’t think he understands the one, two, three [places], no.”

With a 40km difference between both of Roy’s events, mastering both distances is an art. But Roy downplays it, like it’s no big deal to tackle a marathon, never mind a 1500m on the track.

“I have done marathons over 20 years, I have close to 100 marathons done,” she said.

Even with extensive marathon experience, Roy admits it is a gruelling race. “I would like to do 30km, that would be nice,” she said. She prefers flat courses, like the GC2018 route, which will set up a fast contest between the athletes.

Roy’s goal for GC2018 was to make it onto the podium again. She’s already achieved that and is a great chance to back it up on Sunday, but the competition will be tough.

“There’s good girls, it will be hard.

Taking the athletics action to the streets, the marathon races will take place on Sunday 15 April, starting and finishing at Southport Broadwater Parklands. The men’s and women’s T54 Marathon finals, featuring Kurt Fearnley,