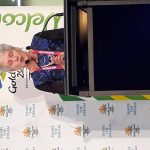 Louise MARTIN (SCO)
On her impressions of GC2018:
“From what I’ve read and what I’ve seen on television, it is going fantastically well. And to have all these world records in the pool, it’s unbelievable.

“On the medal side of things, the very first medal was won by a Bermudan girl, Flora DUFFY (in triathlon). And for a small island to produce an athlete that wins the first medal of the Games is extra special. And the gold medal to boot, that is superb.

“These Games are going to be extra special.”

On GC2018 basketball being played in event cities Townsville and Cairns:

And this will be a first for our Games, because I’m now convinced we can move the heats of the big teams out (in future Games).”

On whether basketball might be played in event cities at the Birmingham 2022 Commonwealth Games:

“I think that will be a possibility. There’s no reason why not now, especially when basketball in England is quite strong.”

On whether any of the ‘firsts’ of these Games she mentioned during the Opening Ceremony is particularly special to her:

And it was rolled in in such a way that it was seamless. We are one family, and it brought the whole thing together.

This jigsaw actually fell into place at the Opening Ceremony.”

On how GC2018 incorporates her own vision of the Games:

“I was elected in 2015 in Edmonton on a platform of ‘Unlocking Potential’. GOLDOC are doing that as well. They’re unlocking potential for lots of people, not only for the athletes, giving them a chance to shine.

They’re also doing it for volunteers, giving them this taste of what it’s like. And then you’ve got everybody coming together to deliver a fantastic Games.

“Everybody has taken ownership of these Games and that, to me, is extra special. We have to learn that we own this, all of us together.

“A lot of people put value in stuff. We don’t; we see values. It’s the value of our Games. The main ones, like humanity, we’re all equal. We have a destiny. That’s what I want these athletes to do: believe in themselves. We’re all equal, where are we going? They need to unlock their potential. It starts here.”

On the future of the Commonwealth Games:

“We’re more relevant than we’ve ever been before.”

On Birmingham, England, being the host city for the 2022 Commonwealth Games:

“Birmingham is the eclectic mix of the whole of the Commonwealth. When you go into Birmingham, as I did last year with the baton and the world athletics championships, they were brilliant.

All these countries are living there, so the communities are already there. It means teams from Jamaica, teams from Pakistan – everybody, you name it – they don’t need to bring a following of people who maybe can’t afford it, because they’ve got ready-made team supporters there. Tremendous.”

On watching Scotland play Cameroon in men’s basketball in Townsville on Saturday:

“It is complete coincidence, because I did not know until two days ago. I am impartial. I support everybody in this.

And I will be supporting the England-India teams just now and I will support both teams (Scotland and Cameroon), but there may be a wee hiccough. But seriously, you just want everybody to enjoy it. To me, that’s the most important thing. Enjoy the game, do the best you can, and nobody can ask anything more than that from you.”

On athletes from Great Britain being able to compete for CGAs such as Scotland at the Commonwealth Games:

“Really, really special. And that’s why I love it, because we’re family. When you’re competing for your own country, you’re all in it together. The pride that it gives you, when you hear that national anthem, it makes the hairs on the back of your neck stand up. There’s nothing better than that.”

On which events she is looking forward to seeing during the rest of the Games:

“All of them. In my role I believe I should be seen at every single venue to support every single athlete. I’m not saying I can do it but I’ll try my very best.” —- GC2018