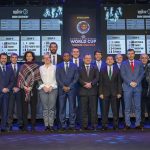 They were joined by former Spain national team players Elisa Aguilar, Margarita ‘Wonny’ Geuer and Nieves Anula – a native of Tenerife – as well as Italy’s Catarina Pollini, who lent a hand in carrying out the draw.