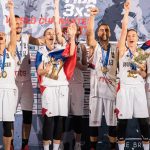 Just 12 days after 3×3 was officially added to Olympic program starting with the Tokyo 2020 Olympics, Serbia continued their domination of 3×3 with a third world title.

Serbia had a perfect 7-0 record in Nantes, in the picturesque Parc des Chantiers, with Nantes’ iconic mechanical elephant transporting hordes of tourists on the horizon.

In the final, Serbia won a thriller against the Netherlands (21-18). Sharpshooter Dejan ‘The Maestro’ Majstorovic scored a game-high 11 points while his team-mate, number one 3×3 player in the world, Dusan Domovic Bulut added 8.

France wowed the crowd in the bronze-medal game after a nail-biting 18-17 success against reigning European champions Slovenia.

France star Angelo Tsagarakis joined the Serbian one-two punch Bulut-Majstorovic on the Team of the Tournament.

‘The Maestro’ topped all scorers in Nantes and was named MVP.

In the women’s category, Russia finished the event undefeated and dominated Hungary (19-12) in the final.

Anna Leshkovtseva and Anastasia Logunova had a team-high 6 points in the final. Tatiana Petrushina added 4 and Aleksandra Stolyar netted 3 points in a one-sided affair.

Bettina Bozoki had a game-high 7 but none of her team-mates contributed more than 2 points, just a few moments after Alexandra Theodorean scored an unbelievable buzzer-beater in a semi-final win against Ukraine.

Ukraine redeemed themselves in the bronze-medal game with a 15-13 victory over the Netherlands.

Leshkovtseva was named MVP and was joined by Bozoki and the Netherlands’ Karin Kuijt in the Team of the Tournament.

Claudia Brunet made history for Andorra by winning the skills contest. The Netherlands’ Kuijt earned silver while Japan’s Yui Hanada collected bronze on her birthday.