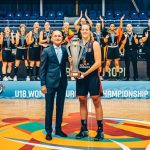 Led by tournament MVP Billie Massey, Belgium used a 22-3 second quarter to build a commanding lead, only for Serbia to charge back from 19 points down, to be leading going into the final minute.

However, Seraphine Bastin showed a cool head from the line, converting 3-of-4 free throws inside the last 40 seconds to seal the game.

Serbia had a chance to win on the buzzer, but Nevana Dimitrijevic’s shot over two defenders was off the mark.

It is the first time Belgium have won a women’s youth medal since 2011, with the title on that occasion also coming at U18 level. The medal marks a continuation of a remarkable summer for Belgium basketball, following on from the bronze they won at FIBA EuroBasket Women 2017.

They were joined on the podium by France, who earlier in the day defeated Czech Republic 55-48 in the bronze medal game. The win for the French came less than 24 hours after the nation’s U16 women’s team claimed gold on home soil at the FIBA U16 Women’s European Championship.

Joining Massey in the All-Star Five was Ivana Katanic from runners-up Serbia.

The third-placed French were represented by Kadiatou Sissoko; whilst there was some consolation for the Czechs with Veronika Vorackova, who earlier this summer played at FIBA EuroBasket Women 2017, also making the All-Star Five.

Rounding out the team was Sweden’s Klara Lundquist, who took her team from Division B one year ago to the Quarter-Finals this year, averaging a tournament-best 23.1 points a game.

On Sunday, there was also joy and relief for Latvia, who held off Lithuania 81-72 in the Baltic derby to preserve their Division A status for 2018. Lithuania will drop to Division B, along with Turkey and Greece, who already learned their fate on Saturday.

They will be replaced by Division B champions Germany; runners-up Ireland who will play in Division A for the the first time in the nation’s history; and Poland, who defeated Great Britain in Sunday’s Third-Place Game to secure the final ticket available.

Germany’s victory also marked a wonderful moment for the Sabally family. After older sister Satou was earlier in the summer named FIBA U20 Women’s European Championship 2017, Division B MVP, Nyara repeated the feat at the U18, Division B tournament. 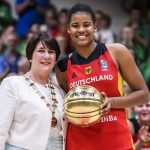 The full Division B All-Star Five can be found Here. —- FIBA