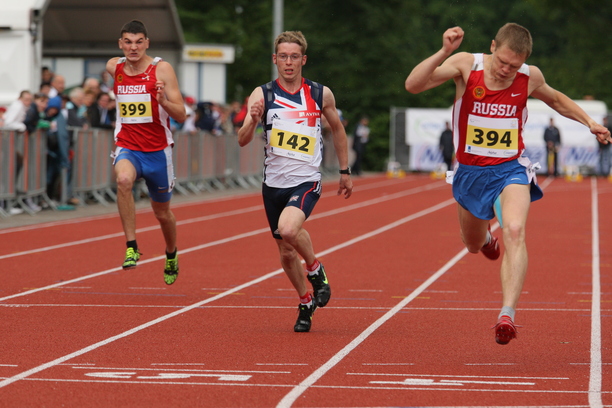 Stadskanaal – Netherlands, June 24, 2012: The rain may have fallen throughout the first day of competition at the 2012 IPC Athletics European Championships in Stadskanaal, the Netherlands, but it did not stop a number of athletes delivering some sensational performances in terrible conditions.

A total of 22 gold medals were up for grabs on Sunday (24 June) – 14 in the field and 8 on the track – and the medals were evenly spread with 21 of the 38 countries taking part winning at least one medal.

Although Russia sit atop the medals table with four golds, five silvers and one bronze medal, it was Greece who secured the first gold of the Championships in a thrilling women’s long jump F13 competition.

After sitting in second place for the whole competition, Anthi Karagianni (4.96m) saved her best jump for the last round to beat Ukraine’s Iulia Korunchak into silver (4.89m) by just 7cm.

Sweden’s Jeffrey Ige added the European title to the world crown he won last year in the men’s shot put F20. The 28 year old world record holder threw 13.50m in the final round to stand top of the podium ahead of the Greek duo of Efstratios Nikolaidis (13.01m) and Kostas Dibidis (12.53m) in silver and bronze respectively.

A strong wind of 2.4m/s prevented a leap of 6.14m/1008points from Russia’s Gocha Khugaev from counting as a new world record in the men’s long jump F37/38. It did win the 27 year old F37 European record holder gold however ahead of Ukraine’s Andriy Onufriyenko (5.79m/931 points) in silver. Khugaev’s teammate Vladislav Barinov (5.62m/924 points) claimed bronze.

Russia claimed gold and silver in the women’s javelin F57/58. Gold went to Olga Sergienko (20.20m/836 points), who was just outside her own European record, whilst silver was won by teammate Larisa Volik (18.91m/772 points).

The final field event of the day was the men’s javelin F44 and saw host nation the Netherlands win gold, their first medal of the Championships. Ronald Hetog (52.09m) took top spot, with Russia’s Eveny Gudkov (48.83m) in silver and Ukraine’s Maksym Solyankin (47.94m) in bronze.

Due to the weather the men’s shot put F55 was cancelled and will now take place on Monday (25 June).

Greece also won the first gold medal on the track on the first day of competition in the women’s 400m T13. A season’s best for Paralympic silver medalist Alexandra Dimoglou (58.47) saw her finish in front of Ukraine’s Olena Glibebova (59.22) and Poland’s Anna Duzikowaka (1:03.74) who took home silver and bronze.

Gold and bronze in the men’s 100m T12 went to Polish athletes in a very close and fast race considering the conditions. World champion Mateusz Michalski (10.85) took gold in a season’s best time while his teammate Jerzy Wierzbicki (11.49) took the third podium spot. Silver was won by Russia’s Fedor Trikolich (10.95).

Boosted by Otleykin’s victory, teammate Evgenii Shvetcov (12.16) secured Russia’s second gold in a row in the men’s 100m T36. His win was something of a shock as Great Britain’s Graeme Ballard (12.49), who set a new world record in May, could only manage bronze. Silver was won by Ukraine’s Roman Pavlyk (12.44).

The IPC Athletics European Championships, featuring around 520 athletes from 38 countries, will run through until Thursday 28 June and is the last major international athletics event ahead of the London 2012 Paralympic Games.

For more information on the event, please visit www.ipcathleticseurochamps.com. To follow live results from the competition, please click on the event schedule/results tab.

View all posts by: Abdul Rahim
One Response to “Russia `Rain’ Supreme on Wet of Athletics”