The scoring system takes each athlete’s three best marks from the series and equates metres to points. Prize money is awarded to the top 12 finishers at the end of the challenge. The athlete with the highest score wins US $30,000. 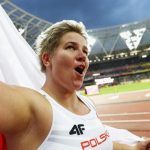 For the third year in a row, Wlodarczyk went undefeated for the entire season. Six of her 12 victories this year came in Hammer Throw Challenge meetings and her three best winning marks – 79.72m in Ostrava, 78.00m in Sao Bernardo do Campo and 77.90m at the IAAF World Championships London 2017 – contributed to her overall score.

World silver medallist Wang Zheng placed second overall in the challenge standings with 225.77 and Azerbaijan’s Hanna Skydan was third with 221.75.