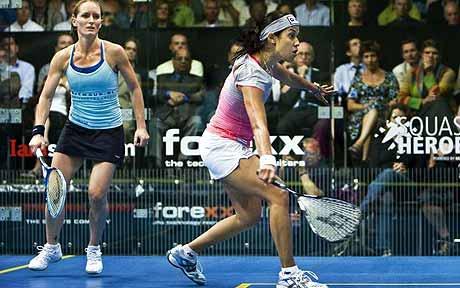 London-UK, June 6, 2012: Squash players all over the world are uniting to create the biggest squash match in history, with two teams playing in one global event showcasing the sport’s bid for a place in the 2020 Olympic Games.

World Squash Day takes place on Saturday October 20th and the format has a 2020 theme: Clubs are invited to field two teams of 20 players, with team members playing against their opposite number in one game up to 20 points.

The scores from every club will count towards an overall global result between Team Squash and Team 2020.

A massive number of leading professionals have lent their support to the project: World champion Nick Matthew said: “This is a great idea for squash players all over the world to back the Olympic bid. My own club, Hallamshire in Sheffield, has always been an enthusiastic supporter of World Squash Day and this looks like a fantastic idea to get huge numbers of people involved.”

World Squash Day organisers hope the total figure of competitors will run into tens of thousands, placing it as one of the biggest sports fixtures in history, as well as certainly the biggest squash match ever.

Andrew Shelley, Chief Executive of the World Squash Federation (WSF), said: “There are more than 50,000 courts spread across the world and to give the players on all of them the chance to compete in the same championship will bring the world of squash together in such a unique way. A day to look forward to, a day that will be remembered!”

Event founder Alan Thatcher commented: “Our aim is to get this event into the Guinness Book of Records, and we hope that kind of response will show a tremendous global support for squash and the Olympic bid. Along with event co-ordinator Vicky Clark I look forward to being inundated with club registrations!”