Ashgabat, 23 April 2017: Turkmen Yulduz Jumabayeva gave the host country a great start in the Senior Asian Weightlifting Championships in Ashgabat on Sunday, winning two unexpected bronze medals in the women’s 48kg. Vietnam and China were also successful on day 1 of competition with 10 and eight medals respectively. 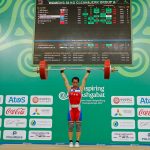 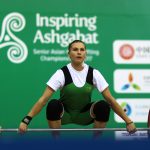 Vietnam’s Thi Thuy Nguyen took silver with 183kg in the Combined event, and 19-year-old Turkmen Yulduz Jumabayeva delighted the home crowd when she grabbed the Combined bronze with 165kg just one day after her 19th birthday.

It was Jumabayeva’s first international medals at senior level, and she said: “I’m delighted about winning this medal in front of my home crowd.

“I did not expect to win a medal at all. I will definitely be back at the Games in September and then I will aim at a medal.”
Champion Sukcharoen said: “I am happy I won my first senior competition, after winning gold at last year’s World Junior Championships. My future goal is to succeed at the senior level as well and win an Olympic medal.

“I am really enjoying my stay here in Turkmenistan. The facilities are great and the people warm and friendly.”

Long’s compatriot Li Fabin, who was in gold medal position, had to settle for silver with 272kg and Vietnam’s Le Quoc Toan Tran took home the bronze with 171kg.

Champion Long said: “Although I was third after the snatch and had only one attempt left to win, I found the strength to succeed in my last try because I was determined to win, that was my pre-Championships target. I am not that satisfied with my total though, I am sure I am capable of doing better.

“I would like to thank all the people who work for the event, staff and volunteers. The city of Ashgabat is beautiful and clean, I like it.”

Men’s 62kg
Sin Chol Bom from the People’s Republic of Korea took home combined gold in the men’s 62kg category. After finishing second in the Snatch event, the North Korean went on to win the Clean & Jerk, sealing the combined classification. Sin was the only one to lift more than 300kg, totalling 301.

Van Vinh Trinh (VIE) repeated his combined silver from the 2016 Senior Asian Championships with a total of 299kg and China’s Huang Minhao came third with 295kg.

Champion Sin said: “It was a very tough competition with great athletes taking part. My target was to give everything I had and in the end I am glad I won two gold medals and a bronze for my motherland.

“The Championships are great and the Turkmens are doing a great job.”