Tokyo, Sept 20, 2018: World Rugby Chairman Bill Beaumont believes that Japan 2019 will be “a very special and game-changing Rugby World Cup” as the one year to go milestone marked with a series of celebrations across the host nation (Rugby World Cup 2019 Japan celebrates one year). 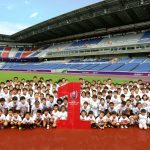 On 20 September, 2019, the world’s top 20 teams, supported by 1.8 million fans in-stadia and a global audience of hundreds of millions, will begin their quest to lift the most coveted trophy in rugby, the Webb Ellis Cup.

Since being awarded the hosting rights in 2009, the Japan Rugby 2019 organising committee in full partnership with World Rugby, the Japan Rugby Football Union and national and local government, has been focused on delivering a unique, once-in-a-lifetime tournament, Asia’s first Rugby World Cup.

And as the tournament reaches the year to go countdown, Beaumont, a member of the World Rugby Council that selected Japan as host nine years ago, is confident that the organisers are making good in their bid promises.

“It will be the most impactful Rugby World Cup ever, attracting and retaining more than one million new rugby players in Asia, while changing the lives of tens of thousands of disadvantaged children in communities across Asia thanks to the generosity of fans supporting our transformational partnership with ChildFund Pass It Back.

“Japan 2019 will also benefit the whole of the nation from Sapporo in the north to Kumamoto in the south, delivering rugby and sports facilities for communities to enjoy, while pumping ¥216.6 billion added value into the economy.

“In keeping with a tournament that has rugby at heart, the team camp and match venue facilities are looking superb and everyone will receive an incredible welcome from engaged host cities and prefectures.”

And with more than 400,000 visitors set to travel to Japan for the six-week tournament, STH Japan, the official travel and hospitality provider, has revised-up its official supporter tour and hospitality programme estimates owing to exceptional domestic and global demand.

Rugby World Cup 2019 Japan celebrates one year by the numbers:

20,000 disadvantaged children in Asia who will benefit from ChildFund Pass It Back support

2.5 million tickets applied for to date

The draw for Rugby World Cup 2019 took place in Kyoto in May 2017 and the full match schedule can be viewed at https://www.rugbyworldcup.com/match-schedule.

So far, 19 of the 20 participating teams have confirmed with Canada, Hong Kong, Germany and Kenya set to compete for the final available place via the repechage in Marseille in November 2018.

The winner will join champions New Zealand, South Africa, Italy and Namibia in Pool B.

“Successful events built on strong partnership and I would like to thank the Japan Rugby World Cup 2019 organising committee, the JRFU and national and local government for their dedication.

However, there can be no sense of complacency and we have a big year ahead as we begin operational readiness testing and urge everyone to keep the strong momentum going.”

“Rugby World Cup 2019 will be a once-in-a-lifetime experience for the people of Japan and for rugby fans from across the world.

Hosting Asia’s first Rugby World Cup is a dream come true for millions of Japanese rugby fans and a wonderful opportunity to showcase Japan to the worldwide rugby community.

Not only with the successful staging of a truly memorable tournament, but with the delivery of a strong and lasting legacy in terms of substantial increases in player participation and huge growth in rugby support here in Japan and throughout Asia.” —- Photo credit: Japan Rugby 2019 organising committee