Home  »  OTHER SPORTS   »   Edwina Tops-Alexander, Queen of the 8th Saut Hermès at the Grand Palais

Paris Mar 19, 2017: Pénélope Leprévost very nearly became the first French rider in history to win the Grand Prix Hermès, the main highlight of the Saut Hermès at the Grand Palais. However, today’s champion, Edwina Tops-Alexander (AUS) and her mare California were just too quick in the end. 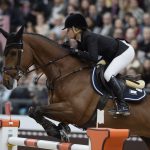 The last day of competition started out with a French win, thanks to a great performance by the silver medallist from the last world championships, Patrice Delaveau. Riding Carinjo*HDC, he won the Prix de la Ville de Paris, a 1.50m class against the clock, and the French public were treated to the fourth Marseillaise of the weekend. Finally, at 11:45, the young Belgian riders Nathan Budd and Emilie Conter – riding Balder van de Ketelijnkouter and Espyrante respectively – won today’s Talents Hermès class involving couples from the same country, and reserved for riders under 25 years old.

Having already won a major class on Friday (the Prix Hermès Sellier), Patrice Delaveau and Carinjo*HDC, his 16-year-old stallion from the Haras des Coudrettes, topped the table once again this Sunday morning in the Prix de la Ville de Paris. With 24 other riders starting the class, the silver medallist from the last world championships rode the fastest of the 6 clear rounds. He finished the Prix de la Ville de Paris – a 1.50m table-A class over two legs, designed by the German course-designer Franck Rothenberger – in 30’’54.

“It’s been a fantastic weekend for Carinjo. He’s competed in three classes and had two great wins; we couldn’t have hoped for more!” said a delighted Patrice Delaveau. “It was a good 1.45m – 1.50m course; it was quite tricky in the second leg against the clock with some fragile obstacles, like the really narrow vertical obstacle before the double vertical/oxer, which you address with a turn. There were a lot of mistakes at this double obstacle. It was the main difficulty for Carinjo and me, but luckily he jumped it really well. As for the rest, I wouldn’t say it was easy for him, but the toughest part was done. This afternoon, I’ll be riding Lacrimoso*HDC in the Grand Prix Hermès. I hope we’ll get a good result. The horse is not yet back to the level he had last year. We’ll see where he’s at after the competition.”

On the third and final day of competition, the 20 up-and-coming international show-jumpers rode in teams of couples for the grand finale: a 1.45m class with pairs of riders from the same country, run over two legs.
Having taken the lead in the first leg with two clear rounds, the Belgian team, made up of Nathan Budd and Emilie Conter, managed to hold their nerve in the second round. After Nathan Budd’s 4-point round on Balder Van de Katelijnkouter, the Belgian team was tied on 4 points with two other countries: Sweden and Great Britain. The young Emilie Conter (16 years old) was last to ride but did not crack under the pressure. Riding Espyrante, – the mare previously ridden by the world No. 1 Daniel Deusser – the daughter of Stephan Conter (the founder the Belgian trading stable Stephex) completed a second clear round. With a total of 81”78, the Belgians pushed the Swedish team into 2nd place by a hair’s breadth (82”25,) with Great Britain 3rd in a time of 82”64.

“I knew I absolutely had to ride a clear round in less than 40 seconds,” explained Emilie Conter. “There was a bit of pressure on me. But my coach told to me to ride with my head and stay focused. The course was fantastic. And my horse was jumping really well. I am really happy for both of us, because my team-mate Nathan did really well too. Jérôme Guéry (the Belgian coach for this Talent Hermès class, Ed.)helped us a lot. He observed the other horses and gave us advice. The whole team from my stables, Stephex, were also right behind us, particularly Daniel Deusser and Lorenzo De Luca.!”

“Wow, it’s just amazing! What a feeling! said Nathan. “It’s the first time we’ve competed here. It was already a dream come true to be able to come and ride at the Saut Hermès; so to win the national-team class is just fantastic! Emilie did a great job!

Jérôme Guéry really helped us. He got completely involved. He was a good sponsor. I would also like to thank Pedro Veniss (the Brazilian rider ) who has been helping me since I was really young, and who is also here this weekend! It was good team work!”

Guided by the champion Rolf-Göran Bengtsson,the Swedish riders Alexandra Eriksson on Liss Royal (double clear round) and Evelina Tovek (who won Saturday’s class) on Quiara M (4/0) took the second place on the podium.

The Grand Prix Hermès – the highlight of the weekend – rounded off the 8th edition of the Saut Hermès at the Grand Palais on Sunday 19 March. Forty-seven of the world’s best show-jumpers, from 19 different countries, took part in this famous class, with €400,000 of prize money at stake.

Only three couples managed to overcome the difficulties of this tricky course – designed by the German course designer Franck Rothenberger – and qualify for the second round against the clock. Having jumped the first clear round of the class, the 22-year-old Irish rider Bertram Allen was first to go in the jump-off on his mare Molly Malone V. With one mistake, he left things to his two adversaries of the afternoon, the French rider Pénélope Leprévost and the Australian rider Edwina Tops-Alexander. To win, they needed to complete a second clear round.

Riding Vagabond de La Pomme, the Olympic champion repeated the feat, much to the delight of the Parisian public. With a time of 41”44, she increased the pressure on the last rider out. Riding her mare California, Edwina Tops-Alexander finally bettered the French rider’s time by eight-hundredths of a second and was crowned Queen of the Grand-Palais with a time of 41”36 in the jump-off.

“I can’t believe it!” said a delighted Edwina Tops-Alexander. “It was a really, really difficult course. But I knew exactly what to do and how to ride it. I was also lucky enough to start last, in the first leg and in the jump-off. So I knew where the other riders had made some mistakes. My mare was in excellent form. She really did a great job, especially considering she is still a relative novice at this level of competition. We have only competed in six Grand Prize together. I really can’t believe it!”