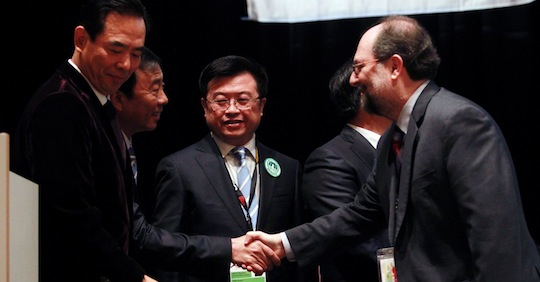 2015 World ChampionshipsThe Annual General Meeting of the International Table Tennis Federation takes place annually during the World Table Tennis Championships. For the 2012 congress held today in Dortmund, 133 National Associations sent delegates (furthermore 7 associations had proxies for voting). By the end of the meeting the ITTF membership was increased to 217 after the AGM approved the applications from St. Maarten in Northeast Caribbean and from Chad in Africa. The ITTF is the second largest International Federation in terms of membership behind the International Volleyball Federation – FIVB.

The AGM awarded the 2015 World Table Tennis Championships to the Chinese Table Tennis Association. The individual world title event will take place in the city of Suzhou on 26 April – 3 May in 2015. The city is host to one of the most prestigious and best tournament on the ITTF Pro Tour (now known as the ITTF World Tour) since 2009, the Harmony Open. The delegation of Suzhou made an impressive bid presentation for the 2015 WTTC which was accepted with acclamation by the delegates.

This will be the fifth time that China is hosting the World Championships, but the first time in the city of Suzhou. The Championships were previously held in:

The organizers for the upcoming events, French Table Tennis Federation (2013 WTTC in Paris) and the LOCOG Table Tennis Manager for the 2012 London Olympic Games also gave an update on their respective events.

One of the most important decision made during the AGM was to pass a resolution on the affiliation status of the Continental Federations. According to the proposed timeline, the Continental Federations will be integrated into the ITTF structure as affiliated members according to the criteria established. Application for affiliation can be renewed every 4 years, coinciding with the year the Olympic Games will be held. The criteria will be approved by the ITTF Development and Continental Council by the end of this year, in order for the affiliation process to start in January 2013 and be finalized by the next AGM. The next AGM will be held in May 2013 in Paris.

During the AGM, the ITTF also presented awards to its main sponsors, to the best event organisers in 2011 and also to the longest serving ITTF staff members. The delegates were entertained at the start of the congress and after the lunch break by Australian pop-star Paulini. She again enchanted her audience, though this time not the spectators at the opening ceremony, but the officials attending the biggest meeting of the ITTF.

Several delegates congratulated the German Table Tennis Association not only for the excellent technical and logistic organization, but also for their help to obtain visas for delegates and teams to take part in the championships. The visas application process was easy and also free of charge.