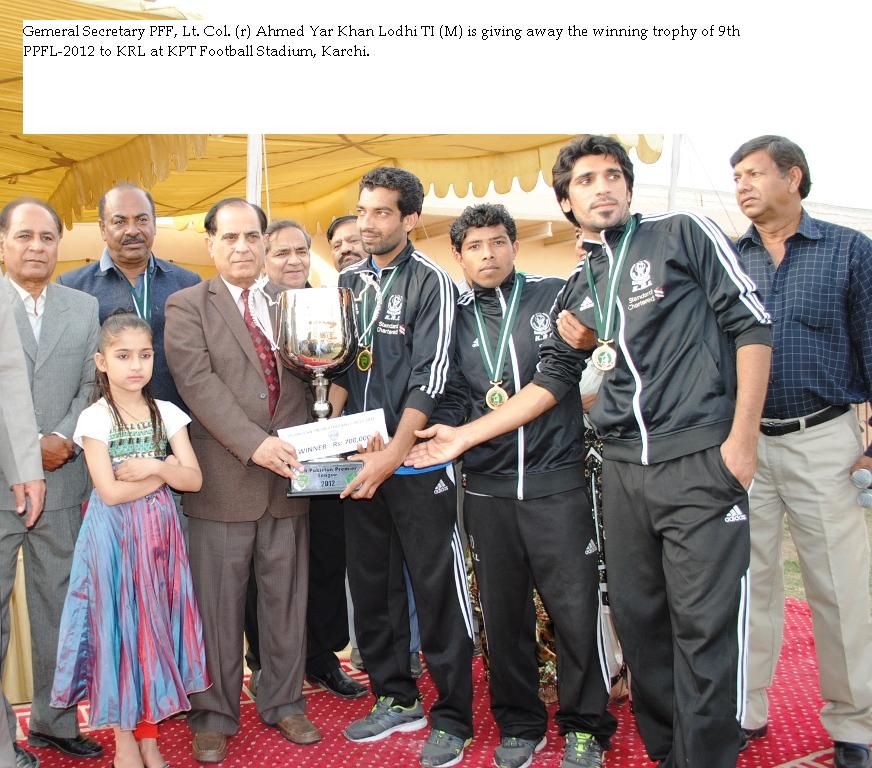 Lt. Col ® Ahmed Yar Khan Lodhi TI (M), General Secretary PFF, was chief guest of the match and presented cash awards and trophies to the teams and players. KRL lifted the winning trophy and gold medals in addition to Rs 700,000 while KESC had to be content with silver medals and Rs 500,000. Muslim FC Chaman got bronze medals and Rs 400,000.

General Secretary PFF, Mr. Lodhi said that PFF has come long way to lay the solid stone of the sports of football in Pakistan. Today it can look back and pride itself of its achievements. All this benefit has been achieved under the direct patronage of President PFF, Makhdoom Syed Faisal Saleh Hayat who’s untiring and selfless efforts have placed Pakistani players on the international league. Mr. Lodhi further said that I will take this opportunity to express my gratitude and that of PFF to thank media with whose contribution our efforts have reached to the grassroots level.

In 9th PPFL 2012 Kaleem Ullah of KRL is the highest Goal Scorer with 35 goals. Muhammad Rasool of KESC is second highest goal scorer with 25 goals. Third and fourth highest goal scorers are Ansar Abbas of Army and Muhammad of KPT 16 & 13 goals respectively. It is pertinent to mention here that in 9th PPFL 2012, Kaleem Ullah has made a record of 35 Goals and became Highest Goal scorer in the history of PPFL by any individual.