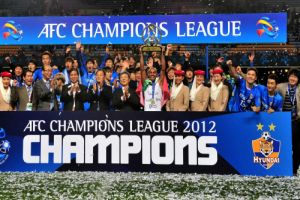 Ulsan, Nov 10: Ulsan Hyundai became the third K-League club in four years to be crowned Asian champions with a 3-0 win over Al Ahli of Saudi Arabia in the final of the AFC Champions League at Ulsan Munsu Stadium on Saturday.

Ulsan were the fourth Korean side in a row to reach the final and Kim Ho-gon’s team join Pohang Steelers and Seongnam Ilhwa Chunma in lifting the title after their successes in 2009 and 2010 respectively.

The win was nothing less than Ulsan deserved against an Al Ahli side who were also making their first appearance in the final of the AFC Champions League but who appeared overawed by the occasion.

Ulsan took command early on with Rafinha firing off an effort from the edge of the area seven minutes in while Kwak headed Kim Seung-yong’s corner wide three minutes later.

It only took a further three minutes, though, for the Korean side to go in front with Ulsan’s prowess from set pieces paying dividends when Kim Seung-yong flicked a free kick into the area and Kwak rose highest to head past Abdullah Al Muaiof.

The goal did little to wake Al Ahli out of their slumber and, although the time spent in the Ulsan half increased, Karel Jarolim’s team did little to make it count.

It was at the other end that the majority of the action continued, with Ulsan’s Colombian midfielder Juan Estiven Velez trying his luck from range twice in the space of three minutes, but both his efforts were off target.

Indeed, it was Ulsan’s complacency at the back that threatened to allow Al Ahli back into the game as the home side gave away possession too easily on several occasions, but only Motaz Al Mosa went close to testing Kim Young-kwang when he shot over the bar with seven minutes left in the half.

Al Ahli shook off some of the lethargy that had hampered their play in the opening 45 minutes, but Ulsan still remained in the ascendancy and, by the 67th minute, they had doubled their lead.

Velez’s left footed cross from the right was headed across goal by Kim Shin-wook and Rafinha emerged through a trio of Al Ahli defenders to poke the ball over the line and to send most of the 42,153 fans in Ulsan Munsu Stadium into raptures.

And eight minutes later Kim Seung-yong confirmed the title would be heading back to Korea with a fierce low left-foot drive that Al Muaiouf could do little to keep out. —- AFC