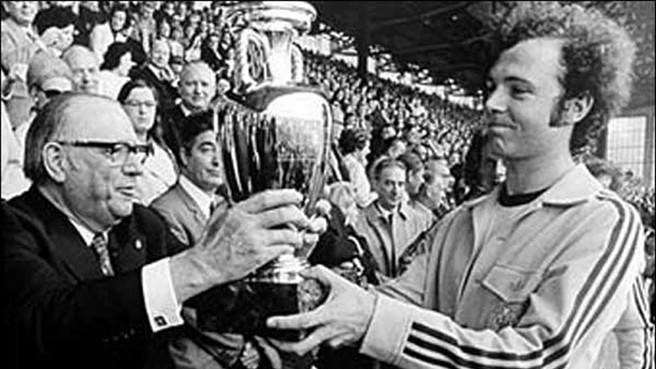 Switzerland, April 10, 2012: From the “father figure” of Helmut Schön to the “phenomenal” Gerd Müller, Franz Beckenbauer looks back on a golden era for the West Germany team he captained to 1972 glory.

A Rolls Royce of a sweeper in an equally majestic West Germany side, Franz Beckenbauer looks back on the team he captained to 1972 UEFA European Championship glory. ‘Der Kaiser’ reflects on the influence of coach Helmut Schön, the goals of Gerd Müller and the disappointment of falling at the last hurdle of their title defence in 1976.

Franz Beckenbauer: It took time for us to find each other; when the 1970 World Cup was over it was time for changes. The big players from that team stopped and it was time to bring in new ones. I think the reason for the success came from the way the team was put together – six players came from Bayern, three from Mönchengladbach.

This team came together and I think the game at Wembley [a 3-1 win in the first leg of the quarter-finals] was very important. That was the first time that a German team won on English soil – it was historic and obviously very good for our confidence. We believed that when you can beat England at Wembley, you can beat anybody.

You were the captain for several years – do you think the 1972 team was the best?

Beckenbauer: Yes, but also I have to say the 1972 European Championship was not as difficult to win. We had one difficult match and that was the quarter-final in England. In the final tournament there were only four teams, today you have 16. It has developed in a way that nobody ever imagined back then.

What did Helmut Schön mean to you and to the German national team?

Beckenbauer: Helmut Schön was like a father to all of us. In the modern football world, something like that is not really possible. Helmuth Schön was above everything an incredible human being. Everybody liked him – he was there for all the players. Nowadays a coach simply doesn’t have the time to worry about his players in that way. The secret was that everybody wanted to play in the national team because everybody knew that they would be taken care of by Helmut Schön.

There are lot of stories about Gerd Müller – could you please tell us about him?

Beckenbauer: Gerd Müller was a phenomenon – he scored so many goals. Thank God he played for Bayern and the German national team. Without him, I don’t think we would have won either the European Championship or the World Cup; you need players like him. He understood better than anybody how to score goals – he can thank his pace for that. At training I played against him and I never had a chance. We knew his moves but still we could not stop him – that’s how fast he was.

“That was the first time that a German team won on English soil – it was historic and obviously very good for our confidence. We believed that when you can beat England at Wembley, you can beat anybody: Franz Beckenbauer, West Germany

What do you remember of the penalty shoot-out defeat by Czechoslovakia in the 1976 final?

Beckenbauer: After winning the European Championship in ’72 and the World Cup in ’74, the team was a little on the wane; Gerd Müller and [Wolfgang] Overath had stopped, so some of the big players were not there anymore in 1976. That left a vacuum which nobody could fill. Who could take over after Gerd Müller? Nobody. The same with Overath.

So, we were quite happy even to make it to the tournament and of course even more to the final. We defeated Yugoslavia in the semi-finals after extra time and then we were in the final – the first one ever to be decided on penalties. Before then there was a replay in the case of a draw. We were not prepared at all for penalties – we were not expecting that, so we lost.

Gerd Müller was a phenomenon – he scored so many goals. Thank God he played for Bayern and the German national team. Without him, I don’t think we would have won either the European Championship or the World Cup: Franz Beckenbauer, West Germany.