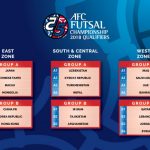 Teams competing in the qualifiers were divided into four zones – East, ASEAN, South & Central and West where they were seeded within their zones based on the AFC Futsal Championship Uzbekistan 2016 ranking.

The ASEAN Football Federation Futsal Championship Vietnam 2017 on October 23 to November 3 will serve as the qualification competition for the ASEAN Zone with four slots up for grabs.

The Islamic Republic of Iran emerged Champions in the 2016 AFC Futsal Championship with Uzbekistan the Runners-up while Thailand and Vietnam finished third and fourth respectively .

East Zone
Group A: A1 Japan A2 Chinese Taipei A3 Macau A4 Mongolia
Group B: B1 China PR B2 Korea Republic B3 Hong Kong

South & Central Zone
Group A: A1 Uzbekistan A2 Kyrgyz Republic A3 Turkmenistan A4 Nepal
Group B: B1 Islamic Republic of Iran B2 Tajikistan B3 Afghanistan

West Zone
Group A: A1 Iraq A2 Saudi Arabia A3 United Arab Emirates A4 Bahrain
Group B: B1 Qatar B2 Lebanon B3 Jordan B4 Syria. —- Photo: AFC