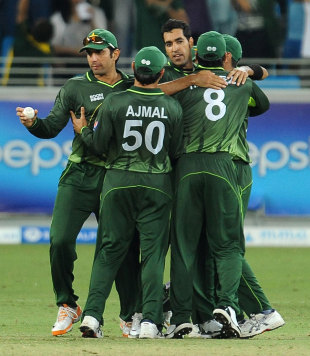 DUBAI, Nov 18, 2011: For the second time in five days, a game was won and lost in the batting Powerplay. This time, however, Sri Lanka were at the receiving end as they fluffed the phase, picking up just 19 for the loss of two huge wickets, leaving their tail needing 72 off the last 10 overs (Pakistan won third ODI).

In conditions aiding spin, especially of Pakistan’s varied vintage, that was a bridge too far for Angelo Mathews to cross.

Batsmen from both sides survived prodigious seam bowling but came unstuck against spin. The similarities didn’t end there – Pakistan made an almighty hash of their own batting Powerplay, to subside from a dominant 150 for 0 in 29 overs to 257 for 8, which in itself was a strong recovery. In the end, it proved sufficient to sneak home by 21 runs.

Having gone past 10,000 ODI runs, Mahela Jayawardene looked set to launch a sortie similar to the one he had purveyed in the previous game, when the fielders came in with 91 needed off 15 overs. Saeed Ajmal ensured there was no reprisal, though, as he slipped a straighter one past Jayawardene’s forward press. Sarfraz Ahmed collected the ball and zipped the bails out at electric speed, with Jayawardene’s back foot hovering inches away from safety. Pakistan sensed the kill and choked Mathews – with the single unavailable, he played out ten dot balls before opening his account as the required-rate crossed seven.

Mathews broke free in the 39th over against Sohail Tanvir, prompting Misbah-ul-Haq to revert to spin. Ajmal slipped another floater across the well-set Dinesh Chandimal, who scythed an outer edge to point. Lasith Malinga, who was among the runs in the Champions League T20, was promoted to No. 7, but Shahid Afridi pinned him with a quicker one. With Mathews out of sorts, Jeevan Mendis kept Sri Lanka alive, but Mohammad Hafeez ended his cameo. Mathews showed little intent to guard the tail – he took singles off the first balls of the last three overs of the game. Umar Gul needed no second invitation to finish the job.

The pitch was neither the feather-bed that Pakistan’s 151-run opening stand – the biggest for any wicket in Dubai – suggested, nor the snake pit that their phase of 42 for 5 in the middle overs made it out to be. There was seam movement, sluggish bounce as well as real carry. Hafeez struggled against the first two, while Imran Farhat was clunked on the helmet when Dilhara Fernando thudded one in short.

With the mischief in the pitch making itself apparent, Hafeez chose to be sedate. He survived a close lbw shout against Seekkuge Prasanna, and went on to prosper on width. Hafeez had meandered to 24 off 55 balls at one stage, before taking Fernando for four fours in one over. Sri Lanka’s slackening discipline was epitomised when Prasanna clanged Hafeez in the covers. Pakistan underlined their dominance with each opener slugging a six against the spinners, but the tide was about to turn.

Pakistan, who have now played 68 matches against Sri Lanka in neutral venues have won 44 times. Overall, in the UAE, Pakistan have won 86 and lost 44 matches. The 151-run stand between Mohammad Hafeez and Imran Farhat is eighth on the list of highest opening stands for Pakistan against Sri Lanka. It is also the second-highest stand for this opening pair after their 228 against Zimbabwe earlier this year.

Hafeez scored his 12th half-century in ODIs to go with three centuries. In his last ten innings, he has scored 508 runs at an average of 56.44 with two centuries and three fifties. Mahela Jayawardene became the ninth batsman overall and the second Sri Lankan batsman to reach the 10,000-run mark in ODIs. He now has 10,004 runs at an average of 33.45 with 15 centuries and 61 fifties.

Hafeez fell playing a tired pull, Farhat holed out, and suddenly Sri Lanka’s spinners found an extra gear. Tillakaratne Dilshan hid the fast bowlers against Abdul Razzaq, promoted to No. 3, and he promptly hauled Prasanna straight to long-on. When Umar Akmal walked too far past a Malinga yorker to lose leg stump, Pakistan found themselves in an extraordinary rut; the Powerplay had just come on, and they had their two most obdurate batsmen – Misbah and Younis Khan – fresh at the crease. When Pakistan made 22 for 2 in their five-over block, Sri Lanka wouldn’t have gambled on doing worse when their turn came. Younis shepherded Pakistan through the end overs to give them a reasonable score.

The chase was set up by a feverish 106-run stand between Dilshan and Kumar Sangakkara, after Gul produced a corker to flatten Upul Tharanga’s off stump. Gul’s legcutters and Sohail Tanvir’s innate curve made scoring difficult, but Dilshan and Sangakkara had the shots to find a way out. Plays-and-misses were interspersed with gorgeous strokes – Dilshan’s cover drives and Sangakkara’s glides standing out – and a lot of madcap running. Pakistan missed at least two direct-hits, before Sangakkara escaped the ignominy of becoming the first batsmen given out for obstructing the field under the new rules.

Dilshan refused a single in the 19th over after pushing to Afridi at cover and setting off. Both batsmen were haring towards the keeper’s end when Afridi hurled the ball to him. Sarfraz, however, flicked one bail off before collecting the ball even as Dilshan ran into him. Sarfraz regrouped and shied at the other end, but this time Sangakkara, making a questionably circuitous turn, came in the way of the throw. Pakistan’s appeal was only for the miss at Dilshan’s end, which was rightly over-ruled by the third umpire.

They didn’t have to wait long for redemption. In the 23rd over, Sangakkara pushed straight to mid-on and took off. The throw this time did not go to the keeper, but smashed out the stumps at the striker’s end with Sangakkara well short. The cameras panned to the trademark celebration of the fielder, the only man in the Pakistan team who puts his arms out and soaks in the adulation. He repeated the celebration five overs later, when Dilshan somehow contrived to guide him from a foot outside leg onto the stumps via his arm. In a game of many heroes for Pakistan, Afridi had once again made the biggest moves.