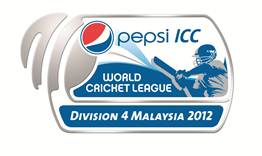 Dubai, Sept 10, 2012: Nepal rounded off its fine run at the Pepsi ICC World Cricket League Division 4 with yet another convincing display to end the event as champion. In the final on Monday at Kinrara Oval, Nepal beat USA by eight wickets to end the tournament on an unbeaten note. USA won the toss and batted first at Kinrara and on another fine track. But it was bowled out for a mere 145 in 48.1 overs. Dangerman Steven Taylor was dismissed by off-spinner Sanjam Regmi early on, but Aditya Mishra (28), Sushil Nadkarni (39) and Orlando Baker (39) held the USA innings together.

Nepal fielded well and took wickets at regular intervals. Basanta Regmi’s left-arm spin was particularly effective and he notched up a haul of five for 20 to easily be the tournament’s highest wicket-taker with 21 for a cost of just 140 runs. Nepal lost yesterday’s centurion Anil Mandal early, but then the other centurion of the competition, Subash Khakurel and one-drop Gyanendra Malla combined well. Malla’s 50 came off 54 balls (6×4, 1×6) before he eventually got out for 66 with the score on 102 in the 20th over.

Thereafter Nepal captain Paras Khadka walked in and steered the side home hitting the winning boundary in front of 250 jubilant Nepal fans.

Nepal’s coach Pubudu Dassanayake was full of praise for his team: “The team did just what was needed here and deserved to win. When I came to Nepal the goal was always to get this team up to a chance of qualifying for the ICC Cricket World Cup 2015 and this Division 4 win now means we’re one step closer. There’s a lot more hard work to do but I’m delighted with the progress so far.”

In the third and fourth place playoff at Selangor Turf Club Singapore emerged easy winner over Denmark thanks to Chetan Suryawanshi’s all-round show. He opened the bowling to take three wickets and then donned the wicket-keeper’s gloves and made a stumping. Denmark was skittled out for 83 just after the half-way stage. Suryawanshi then opened the innings and made a rapid 45 (29b, 7×4, 2×6) as his team won by five wickets with more than 33 overs to spare.

Overall though, Singapore’s captain Saad Janjua wasn’t a happy man: “We came to Malaysia to win this tournament. The third place finish is very disappointing. We trained hard, prepared well but a bit of bad luck with the weather and the fact that our batting didn’t click meant we underperformed.” Singapore and Denmark remain in Division 4 for the next cycle of Pepsi ICC World Cricket League events.

Meanwhile, Malaysia secured its second win of the tournament, this time again over Tanzania to win the fifth-sixth place playoff at the Bayeumas Oval. As in its group match the day before Tanzania batting first made 187. Opener Anil Patwa (67: 105b, 7×4) held the innings together before he was the fifth man out with the score on 135 in the 36th over. Patwa received some support from Nasibu Mapunda (30) and the hard-hitting Kassim Nassoro (25 off 30 balls) before Tanzania was bowled out out for 187 in the 50th over.

Malaysia made a steady start in its reply as Tanzania’s bowlers and fielders kept the pressure on. Wickets fell at regular intervals and at 85 for five Malaysia appeared to be in real trouble. Youngsters Khizar Hayat (49 not out) and wicket-keeper Shafiq Sharif (57 not out) combined for a match-winning partnership, accelerating after a slow start to put on an undefeated sixth-wicket stand of 103 to take their team home with 25 balls to spare.

Malaysia’s captain Suhan Alagaratnam was a relieved man afterwards. “We bowled well but our batsmen have struggled throughout this tournament and we were in some difficulty until Khizar and Shafiq played well to get us through.”