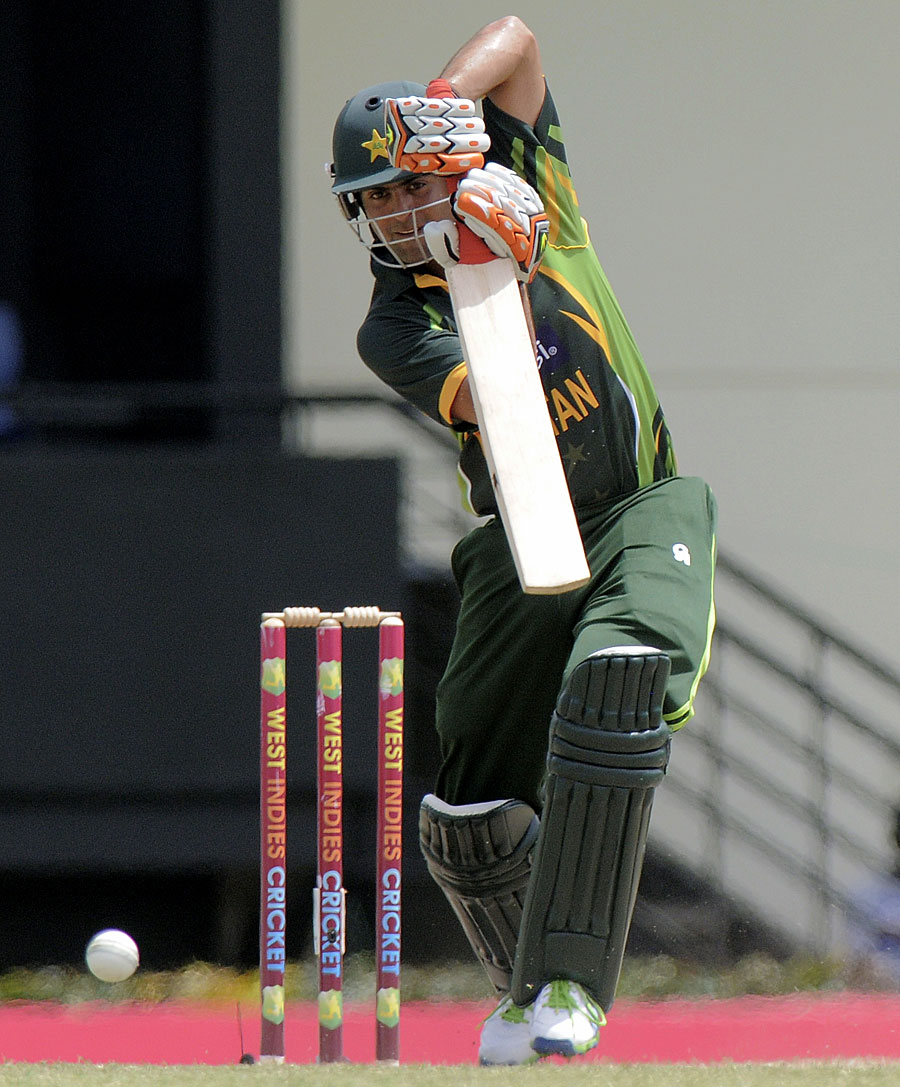 St Lucia – West Indies, July 24, 2013: With his fourth half-century in five games this series, the world’s leading ODI run-getter of 2013 shepherded his volatile band of batsmen home in another tricky chase. Misbah-ul-Haq battled falling wickets at the other end, a charged up Tino Best, and a rain interruption as late as the 98th over of the game to take Pakistan to their third successive away bilateral series win over West Indies. Yet again this series, Umar Akmal was called upon to overcome the asking-rate towards the end, and once more, he did not disappoint, delivering the series to Pakistan with a 3-1 margin.

Misbah formed partnerships with Ahmed Shehzad, Haris Sohail and Akmal before falling in the last over trying to slog the winning hit, with the scores tied. He had already ensured Pakistan had won the series; a tie would have meant the margin would have been 2-1.

When Sohail became the latest profligate Pakistan batsman to fall, chasing a wide Best delivery, Pakistan needed 83 from 12 overs. Best, having conceded 25 off his first three overs, was in the mood for a furious comeback. Pinging down bouncers in the mid-140s, he smacked one into Misbah’s fingers. While the storm was being weathered by the captain, Akmal did his act at the other end.

The inexperienced Jason Holder was taken for three successive fours in the next over, the 41st, the second of those coming off a poor effort at fine leg from Marlon Samuels. It wasn’t the first time West Indies had messed up in the field today, and it wasn’t to be the last. Akmal steered a short ball to the fine third man rope next ball. Holder cracked further under pressure, four leg-byes resulting off Misbah’s pad down the leg side off the last ball of the over.

Misbah managed a four off an inside edge to Sunil Narine next over and held his nerve to reverse-sweep the offspinner for four more. Then arrived the moment which once again highlighted what a farce a watered-down DRS has been in this series, in the absence of HotSpot. West Indies were sure Misbah had gloved a Best bouncer to the keeper down leg, the on-field umpire did not agree, and the third umpire had too much guesswork to do with only replays and sound as tools. Misbah was on 49 then, and Pakistan would have needed 53 of 46 had he been given. Darren Bravo had been given caught-behind on referral on the basis of sound earlier and West Indies had a right to expect consistency.

Though Best predictably lost his temper, West Indies were not giving in. Dwayne Bravo, who often disappears for plenty at the death, delivered two tight overs. But Akmal found the big stroke when Pakistan sorely needed it. Narine was cut for four, Best was carted over mid-off for six. A top-edge flew over the keeper for four more, but even as clouds swept in over the stadium, Akmal holed out to mid-off for 37 off 28.

A 20-minute break followed but Pakistan were ahead on D/L by five runs, and safe in the knowledge that the series was theirs, in case no further play was possible. Sunshine followed soon, though, and Shahid Afridi weighed in at the hit end of the hit-or-miss scale. Bravo was pulled for six over deep midwicket and punched past point for four. Game over? Not yet.

Misbah hit Holder to short midwicket second ball of the final over, and Saeed Ajmal took three deliveries to get bat on ball. Had the throw from mid-on hit, it would have gone down to the final ball. It didn’t, and Afridi and Ajmal hugged, as did their team-mates in the Pakistan dressing room.

Credit for the win also went to Shehzad, who made his first substantial score of the series, and guided Pakistan’s chase amid tight bowling from Narine and Darren Sammy. The pitch eased out further in the second innings. Cutting and pulling without trouble, Nasir Jamshed and Shehzad brought up Pakistan’s first 50-run opening stand in 17 innings, excluding a game against Scotland.

Trust Pakistan to blow such a rare promising start. Jamshed was stranded for the second game running, Shehzad taking a few steps and stopping this time, after Mohammad Hafeez in the previous game. Hafeez himself got a start and then had a heave at Sammy. However, Shehzad had Misbah to steady things.

The West Indies top six never managed any sort of sustained partnership. Two of them, Johnson Charles and Samuels, got forties, but were also the ones who struggled to score the most. Devon Smith fell early yet again. Chris Gayle and Lendl Simmons were unable to convert starts.

Junaid Khan was outstanding, barring the last over when Sammy went after him, making a case for him to have played through the series. Mohammad Irfan was unlucky not to break through in his opening spell, but came back even stronger to remove Charles and Samuels. West Indies took 64 from the last five overs, but Misbah’s calm and Akmal’s aggression were enough to overhaul that. —- By: Abhishek Purohit/Image © AFP