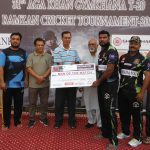 The left-hander Bilal Irshad hoisted three towering sixes and struck eight boundaries and in scoring an unbeaten 81 from only 51 deliveries as Qasmi gymkhana raced to victory in the last ball of 20 over, while chasing 216 for the loss of only three wickets.

Bilal then set the platform with a magnificent third wickets partnership of 100 with all-rounder Hasan Sardar contributed dazzling 56 off 29 balls that included two hits to the fence and five huge sixes.

As gym were home when Bilal Irshad lofted six on second last ball while made required 4 runs on last ball of left armed Dainsh Aziz.

Fouz ul Hassan hurricane knock 40 balls of 80 with the aid of five huge sixes and six four butt he fail to save his team to defeats, Ahsan Ali also contributed breeze 43 off just 16 balls with six four and two sixes, he and Fouz added 100 for the second wickets, Sadaqat Ali scored unbeaten 36 off 16 balls with four towering sixes and one four, Rameez Raja jr scored 27 off 19 ball with two four and one six.

Qasmi Gymkhana will meet Agha Steel in the title decider clash on 29 of Ramadan 2:30 pm at AKG Ground.