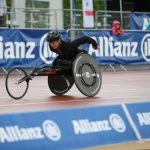 With just six weeks to go before the Championships get underway in London, Great Britain, the popular Nottwil meeting will provide a crucial chance for many to test their own progress – as well as check out key opponents.

More than 210 Para athletes from 29 countries are set to take part in the three days of competition; here are some of the key names to look out for:

Men’s 100m T51
Both the reigning Paralympic champion Peter Genyn and the former Paralympic champion Toni Piispanen line up in what is expected to be a closely fought encounter. Belgian Genyn beat his Finnish rival to the line at Rio 2016, but Piispanen still holds the world record and when the pair raced in nearby Arbon recently they could not be separated – both were awarded the same time.

Men’s 100m T53
Canadian Brent Lakatos is in scintillating form – he broke the 100m T53 world record twice in Arbon this month and also set new world records in the 200m and 800m T53. He lines up against a field including fellow Canadian Ben Brown as well as London 2012 champion Mickey Bushell.

Men’s 200m T42
Great Britain’s Richard Whitehead is amongst the home favourites going for global gold this summer. The 40-year-old is showing no signs of slowing down, having broken the 200m T42 world record last year on his way to Paralympic gold. Frenchman Clavel Kayitare will have a tough race on his hands in Nottwil.

Men’s 800m T34
Fresh from breaking the 200m and 400m T34 world records in Arbon less than one week ago, Tunisia’s reigning world champion Walid Ktila will be hoping for a strong performance over 800m – it’s a distance in which the 31-year-old now looks particularly vulnerable, having lost out on Paralympic gold to the UAE’s Mohamed Hammadi last year. Hammadi beat Ktila over two laps in Arbon – smashing the Tunisian’s world record in the process.

Men’s 1,500m T54
Always a highly competitive event, this year looks to be no different as local favourite Marcel Hug takes to the track alongside the likes of Japanese wheelchair racers Tomoki Susuki, Sho Watanabe and Masazumi Soejima. Tunisia’s Yassine Gharbi is also in form – he broke the African record in the 200m and 400m T54 in Arbon.

Women’s 100m T11
Brazil’s former Paralympic and world champion Terezinha Guilhermina has made the trip over to Europe searching for a return to form this year after a disappointing 2016 Paralympic Games. Now that Paralympic champion Libby Clegg has ruled herself out of the World Championships due to injury, Guilhermina’s chances of success this summer have increased. Just how much she has recovered from her Rio 2016 heartache will be fascinating to see.

Women’s 100m T34
If recent form is anything to go by, Hannah Cockroft’s rivals will have to be at their very best to stand a chance of beating the 24-year-old Briton. Cockroft knocked 0.03 seconds off her own 100m T34 world record in Arbon – a mark she had been chasing for some time. Dutch duo Amy Siemons and Desiree Vranken are amongst those hoping to upset.

Women’s 1,500m T54
Home favourite Manuela Schär is amongst a stellar field but the Swiss wheelchair racer will surely be buoyed by her recent successes – which include victory at both the Boston and London marathons in April, then more recently a new European record over this distance in Arbon. She will have to watch out for China’s Paralympic marathon champion Lihong Zou, Briton Jade Jones as well as Japan’s Kazumi Nakayama.

Women’s long jump T44
Great Britain’s Paralympic silver medallist Stef Reid has enjoyed her best ever start to the season this year and she will be hoping that form continues as the World Championships approach. Dutch Paralympic bronze medallist Marlene van Gansewinkel also competes in Nottwil and is likely to be Reid’s biggest threat come London 2017 as reigning world and Paralympic champion Marie-Amelie le Fur has opted not to compete this year. —- IPC