London, Sept 8, 2017: World Squash Federation Vice President Pablo Serna led a delegation representing Squash in the Pan American region at a meeting with the Organising Committee of the 2018 Youth Olympic Games in Buenos Aires at which the sport’s debut in the event was formalized (Squash Youth Olympic Games Debut).

The first meeting to discuss the logistics and presentation of Squash as a showcase sport at the Games in October next year took place at the Argentine Olympic Committee offices in Buenos Aires.

Squash will be presented at Tecnololis, the venue where Badminton, Futsal and Table Tennis will be played.

“It is an exciting moment for squash and our young players who will represent our sport in Buenos Aires,” said VP Serna after the meeting. “We are very grateful to the YOG18 Organising Committee for including Squash in their Games and they can be certain that we will make sure we do them proud.”

The event days for squash, the format and other general arrangement and presentation details, will be decided at follow up meetings, where WSF will be liaising with the hosts in conjunction with the Argentinean Squash Federation. 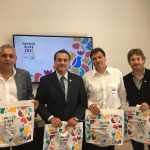