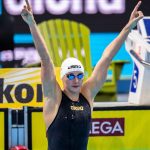 The final day of the Championships couldn’t start better, with the second Canada’s gold of the competition, in the women’s 4x50m free relay. Anchored by the incredible Penny Oleksiak (the first three swimmers were Michelle Williams, Sandrine Mainville and Taylor Ruck), the local quartet completed the race in 1:35.00, leaving the defending champions, the Netherlands, with the silver in 1:35.37. Italy got the bronze in 1:35.61, with final swimmer Federica Pellegrini adding another medal to her rich roll of honour. In Doha 2014, USA (fourth this time) had been second, while Denmark (only fifth in Windsor) had earned bronze. —- FINA