London, May 31, 2017: The International Mixed Martial Arts Federation today officially announced the details of the 2017 IMMAF World Championships of Amateur MMA which will take place in Bahrain from 12 – 19 November. 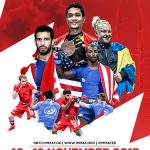 IMMAF’s prestigious 5 day, nation vs nation tournament will be hosted by the Bahrain Mixed Martial Arts Federation (BMMAF) under the patronage of His Highness Shaikh Khalid bin Hamad Al Khalifa at the Khalifa Sports City Arena in Manama.

Launched in 2014, the event’s 4th edition is the first to take place outside Las Vegas, USA, as its legacy continues in the home of MMA in the Middle East. Bahrain is renowned for its excellence in hosting international sports events, most notably the annual Formula One race since 2004 which has turned the Kingdom into a popular destination for athletes and tourism.

HH Shaikh Khalid bin Hamad Al Khalifa stands as the First Deputy President of the Supreme Council for Youth and Sports, Honorary President of Bahrain Mixed Martial Arts Association and founder of KHK MMA (Khalid bin Hamad Al Khalifa Mixed Martial Arts Organization). He has been the driving force for the development of MMA in the region, and in the promotion of the Kingdom’s position in the sport globally.

The 2017 IMMAF World Championships is endorsed by the Bahrain Olympic Committee, to which BMMAF President, Khalid Abdulaziz Al Khayat, has recently been nominated for Board of Directors membership. During competition week, Bahrain will additionally play host to IMMAF’s 2017 congress.

The 2017 World Championships announcement comes ahead of IMMAF’s first venture into Asia, as the organization prepares for its inaugural Asian Open Championships in Singapore from 12 to 16 June.

IMMAF President Kerrith Brown said:
“We wholeheartedly thank His Highness Shaikh Khalid bin Hamad Al Khalifa for his deep support of the sport of MMA and of IMMAF. We are also grateful to BMMAF President and IMMAF Board Member, Mr. Khalid Abdulaziz Al Khayat, for his backing and commitment.

“We invite Amateur competitors’ world over to participate in this flagship world championship tournament, one that will surely cement the nation of Bahrain’s position as a powerhouse in the development of MMA, both in the Middle East and globally.”

The International Mixed Martial Arts Federation is the international democratic body for the sport of MMA, representing MMA’s stakeholders across 65 nations worldwide. Founded from within the MMA community for the MMA community, the purpose of the IMMAF is to protect and further the development, recognition and regulation of the sport of MMA on all levels, enabling international competition through its family of non-profit, democratic national federations. —- www.immaf.org