Santiago, Chile, Aug 10, 2017: The Cadet World Judo Championships 2017 opened on Wednesday with a highly-entertaining day of judo which again showed the diversity of the sport while judo’s values were impeccably observed by the teenage competitors at the Santiago National Stadium in Chile.

Russia, Japan, Turkey and Brazil all won gold as 13 counties medaled on day one.

The first day in the capital city saw the boys’ -50kg and -55kg judoka launch their medal bids along with the girls’ -40kg and -44kg athletes.

All 90 judoka due to compete on day one successfully passed their weigh-in in another illustration of the attitude and professionalism of the young judoka.

Traits which they have inherited from their senior teammates and coaches while the values which were shown by winning and losing judoka – which are ingrained in judo’s culture – have been instilled in them from the day they first tied their judo belt.

Ahead of the final block, the fifth edition of the Cadet World Championships, and first in South America, was officially opened. 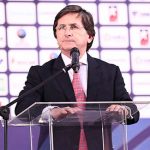 Aquiles GOMEZ GUZMAN (above), Chile Judo Federation President, said: “Dear friends, I am really happy to be here today for this vitally important occasion for judo and for us in Chile.

When I see these stands overflowing with enthusiasts and 64 countries bringing together over 400 judoka, I feel that all the effort made by our country, with the support of the IJF and the Pan American Judo Confederation, has been incredibly worthwhile.

“The organisation of a World Championships at this level shows how our country has made great strides and that we have a growing presence in the judo family. For this reason, I feel that this event marks a pivotal point for the growth of judo in Chile and we are all very excited about the future of the sport in our country.

This event gives us the opportunity to see the world and Olympic champions of the future and for fans to see the greatness of this universal sport.

“I give my profound thanks to all those who have supported us and especially the IJF President Marius VIZER and all IJF Executive Committee members.

I also thank all the volunteers and our organisational team who have helped to make this competition a reality and a success. I now declare the Cadet World Championships 2017 open.” 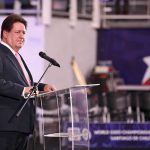 Manuel LARRANAGA (above), Pan American Judo Confederation President and IJF Vice President, said: “Good afternoon everyone, on behalf of the IJF President Marius VIZER, we want to thank the Chile Judo Federation, as well as the Ministry of Sport in Chile, for receiving us with this Cadet World Championships.

We want to thank all the countries present here for their contributions to judo in this age group. We wish the best of luck to all and a pleasant week in Chile.”

The competition continues on Thursday with the boys’ 60kg and -66kg categories which will be featured along with the girls’ -48kg and -52g categories.

GIRLS
-40kg: Russia off the mark from the outset 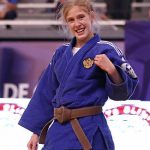 With the contest scoreless going to the final minute it looked like the first final of the competition would require golden score. However, VOROBEVA was sharper in ne-waza and turned her opponent over into submission and the referee stepped in to stop the action and to award the contest to the Russian.

In the first semi-final 17-year-old Glafira BORISOVA (RUS) fell to NIKOLIC who won in golden score by a waza-ari from a drop seoi-nage. In the second semi-final VOROBEVA bested 14-year-old Cadet European Championships winner Anastasiia BALABAN (UKR) by a waza-ari score.

The first bronze medal was awarded to BALABAN, who claimed the first medal in Santiago, by throwing Cadet Asian Championships bronze medallist Sara KULYM (KAZ) with a ko-uchi-gake for ippon after just 48 seconds.

The second bronze medal was won by EYOF winner Jente VERSTRAETEN (BEL) who defeated BORISOVA for a place on the medal podium.

Belgian’s only competitor in Chile made her appearance count as she won a deserved bronze medal by a waza-ari as the BORISOVA family – who won this category in 2015 thanks to Glafira’s older sister Olga BORISOVA (RUS) – had to settle for a fifth-place finish. 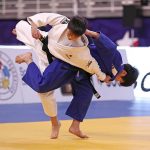 Bielsko Cadet European Cup bronze medallist KAWABATA, who had only fought outside of her homeland once before today, triumphed against 15-year-old ippon-seoi-nage specialist KIM Jong Hung (PRK) by way of hansoku-make as the latter was reprimanded for a waki-gatame.

In the first semi-final Worlds debutant Carlotta AVANZATO (ITA) lost out to KAWABATA who, while being known for her thunderous sode-tsurikomi-goshi, showcased her ashi-waza on this occasion as she scored a waza-ari from a ouchi-gari after 90 seconds of golden score for a place in the gold medal contest.

In the second semi-final KIM Jong Hung (PRK) prevailed against Cadet Pan American Championships silver medallist Amanda ARRAES (BRA) who was penalised after 75 seconds of added time to move down to the bronze medal contest.

The first bronze medal was clinched by ARRAES when Cadet European Championships bronze medallist Liza GATEAU (FRA) was disqualified for a third shido. The Brazilian rushed off the mat to celebrate with her coach after being officially awarded the contest by the referee.

The second bronze medal was won by AVANZATO who impressively defeated 15-year-old Cadet European Cup winner Mariam AMKHADOVA (RUS) by ippon in golden score. Italy always unveil some exceptional talent at the cadet and junior level year-after-year and thanks to AVANZATO made an immediate impact on day one in Chile. 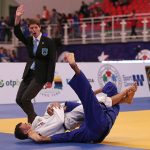 Cadet Pan American Championships gold medallist Aldi DE OLIVEIRA (BRA) won all four of his contests in Chile to capture World gold at the first attempt. The ne-waza level of DE OLIVEIRA surpassed his rivals and that was the difference in the final when he strung together a beautiful combination to defeat Maksud OCHILOV (UZB).

Cadet Pan American Championships winner DE OLIVEIRA threw his Asian opponent with a controlled tomoe-nage to setup the decisive juji-gatame from which OCHILOV was forced to submit.

In the first semi-final DE OLIVEIRA (BRA) defeated EYOF and Cadet European Championships bronze medallist Ejder TOKTAY (TUR) by a waza-ari score. The Brazilian scored with 26 seconds left on the clock from a koshi-waza attack and his Turkish opponent could not find a response in the closing seconds.

The first bronze medal was claimed by 16-year-old EYOF silver medallist Daan MOES (NED) in golden score when KARA was penalised for passivity and it was his third infringement so the Turkish fighter was disqualified and his Dutch victor fell to his knees in celebration.

The second bronze medal went to EYOF winner FECZKO Csanad (HUN) who secured world honours with one of the throws of the day. The Hungarian beat TOKTAY by ippon with a majestic utsuri-goshi and his burgeoning career continues to move forward and win admirers. 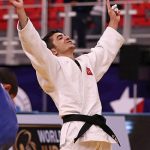 European Youth Olympic Festival and Cadet European Championships winner Mihrac AKKUS (TUR) completed a stunning treble by winning the Cadet World Championships. AKKUS, 17, who is one of the leading prospects in the sport, raises his game with every competition and was arguably the player of the day as he won four of his five fights by ippon.

The Turkish starlet saw off Bielsko Cadet European Cup bronze medallist Luka KAPANADZE (GEO) in the final after just 20 seconds with a booming ouchi-gari for ippon.

In the first semi-final AKKUS outfought Cadet Asian Championships silver medallist BYAMBASUREN Sukhbat (MGL) as he won by a waza-ari after a strong performance against the hard-working Mongolian. In the second semi-final KAPANADZE defeated Cadet European Championships bronze medallist Abrek NAGUCHEV (RUS) by a shido in golden score.

The first bronze medal was won by NAGUCHEV who countered a seoi-nage attempt from IJF debutant AN Sin Hyok (PRK) for ippon.