Monaco, July 24, 2018: The IAAF is looking to discover an announcer for the Buenos Aires Youth Olympic Games 2018.

Are you passionate about athletics? Can you engage an audience? Could you be the new voice of future global championships? 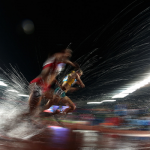 The ‘Voice of YOG’ competition invites fans between the ages of 18 and 35 to submit a 60-second clip of their own commentary.

Entries will be judged by an expert panel and the winner will earn the opportunity to be an announcer for the athletics competitions at the Buenos Aires 2018 Youth Olympic Games.

Budding announcers can choose between two clips on which to commentate:

Users can watch the clips online on IAAF’s YouTube channel and record their voice-over selfie video with their smartphone before posting it on Instagram or Twitter, using the hashtag #IAAFvoiceofYOG.

The expert panel – which includes Murer, Sanchez and Olympic medallist-turned-commentator Katharine Merry – will review the clips and whittle down the entries to a short list of three candidates.

Entrants must be fluent in English and have a passionate and engaging voice.

A strong knowledge of athletics is, of course, a bonus as well as basic skills in Spanish.

The prize includes a meet and greet with Murer and Sanchez, while on-site training will give by the IAAF’s event presentation manager.

Travel, accommodation, transport and meals will also be provided.

Entrants must be available from 8-18 October and be willing to travel by plane.

The competition will officially open today, 24 July, and run until 19 August. —- IAAF