Monaco, June 5, 2018: As people from around the world take time to reflect upon the state of the planet on this World Environment Day, the IAAF is delighted to share this message from running legend Haile Gebrselassie who reminds us of the importance of clean air within athletics and the urgent need to continue the battle to combat air pollution (reduce plastic waste). 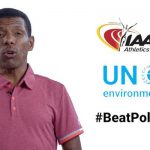 When he became president of the Ethiopian Athletics Federation in November 2016, his first action was to move the main national team training base from Addis Ababa to outside the capital. “It is better for their health and their performance,” he said.

“Millions of people run every day and it is growing. Air quality matters and I am proud that our athletes and our sport are leading an ambitious campaign to tackle this problem.

Working with UN Environment on air quality and joining the International Olympic Committee’s initiative with UN Environment for its ‘Clean Seas Campaign’ are both important steps to keeping our planet as healthy as we want the next generation to be,” said IAAF President, Sebastian Coe.

With its recent pledge to help beat the global air pollution crisis in mind, the IAAF has teamed up today with the International Olympic Committee (IOC) and UN Environment for its ‘Clean Seas Campaign’ to increase global awareness of marine litter and to implement measures that address gaps in waste management.

The IAAF is one of seven major sporting bodies and representatives from European and Oceania National Olympic Committees who have joined forces in the effort to support the IOC in addressing this global issue.

“The IOC is embracing sustainability in its day-to-day operations, as well as taking a proactive leadership role to inspire Olympic stakeholders and the wider sports community to implement best sustainability practices,” said Prince Albert of Monaco, who serves as the Chair of the IOC Sustainability and Legacy Commission (reduce plastic waste).

“Making a pledge to the UN Environment’s Clean Seas Campaign is another important example of how the IOC is implementing its Sustainability Strategy.”

Erik Solheim, the Executive Director of UN Environment and a member of the IOC Sustainability and Legacy Commission, said:

“This is the biggest commitment ever made from sport to address plastic pollution.

The International Olympic Committee’s Clean Seas pledge will transform the awareness and use of plastic waste in sport. We are delighted to see the actions taken by so many sporting organisations as well as sponsors.”

The IAAF has already pledged to introduce measures to reduce plastic waste at future IAAF events, and to encourage member federations to follow suit in addition to its air quality partnership with UN Environment. Some actions pledged by other sporting bodies:

– World Sailing will pledge to implement an ambitious waste reduction strategy for all its events by 2019, and launch an education programme to reach an estimated 70 million sailors.

– The International Triathlon Union (ITU) will work closely with its local organising committees, national federations, stakeholders and the IOC to raise awareness of the issue of marine litter (reduce plastic waste).

– The International Surfing Association (ISA) will elect a Sustainability Partner by the end of 2018, aiming to implement a plan to use, reuse and recycle plastics at ISA World Championships by 2019, and expand its education materials on sustainability.

– The International Ice Hockey Federation (IIHF) is decreasing plastic use and encouraging recycling at its headquarters, and providing recycling education opportunities at national and youth camps.

– The International Golf Federation (IGF) is working with governing bodies, national associations and grassroots facilities to drive more responsible resource use through the GEO Foundation.

– World Rugby has undertaken a variety of actions to reuse and recycle, and will implement new measures with a focus on the reduction of plastic waste.

Other National Olympic Committees from around the world will also be joining the Clean Seas movement with their own commitments – such as Spain and Germany, which are reducing waste and working on raising awareness nationally. —- IAAF