By Nicola Milan, Doha, Qatar, April 25, 2018: Two-time Olympic Champion, three-time World Champion and six-time Diamond League Champion, Christian Taylor will kick off the 2018 IAAF Diamond League season in Doha on 4th May at Qatar Sports Club in what promises to be a phenomenal triple jump showdown. 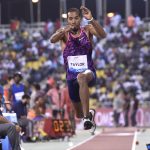 Meanwhile, the women’s 100m hurdles will once highlight the USA’s continued domination on the world-stage as current and former World and Olympic Champions go head to head. Tickets are on sale now online at https://bit.ly/2GVnHqN and at Virgin Megastores across Qatar for the exhilarating evening of world-class athletics.

USA’s Christian Taylor will go against Cuba’s Pedro Pablo Pichardo once again in a battle that provided the greatest triple jump competition in history in the very same stadium at the 2015 Doha Diamond League.

Never before had two men jumped beyond 18 metres in the same competition but Doha 2015 saw Pichardo, the 2012 World Junior Champion and the 2013 World Championship silver medalist,break the stadium record to jump 18:06, just 2cm beyond Taylor’s best jump of 18:04.

The re-match will provide one of the unmissable competitions of this year’s Doha Diamond League. 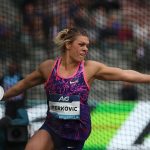 Taylor will start as the overwhelming favourite this year after dominating triple jump over recent years and will be looking for his fourth Doha crown.

USA fans will have even more to cheer for in the women’s 100m hurdles as a stellar line-up of Americans will battle it out in an enthralling competition.

Leading the field is world-record holder and recently crowned 2018 World Indoor Champion, Kendra Harrison, who took her first global crown in Birmingham in March and will be looking to get her 2018 Diamond League campaign off to a winning start.

However, her task will not be easy as reigning Olympic Champion and 2013 World Champion, Brianna McNeal (nee Rollins), returns to action.

Fans can expect to be further amazed by Olympic and World medallists in the women’s discus. Looking to add another victory to her impressive string of global titles is reigning World, Olympic, European and Diamond League Champion, Sandra Perkovic of Croatia.

Perkovic will be up against stiff competition from 2009 World Champion Dani Stevens of Australia, who recently won her second Commonwealth Games title and finished in silver position behind Perkovic at last year’s World Championships, and Cuba’s Denia Caballero who beat Perkovic to win the 2015 World Championships and claimed bronze at the Rio 2016 Olympic Games.

This year’s Doha Diamond League will take place on Friday 4th May from 5-9pm at Qatar Sports Club. Tickets can be bought online now https://bit.ly/2GVnHqN.