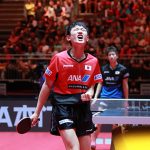 Making his World Championships debut in Düsseldorf, instead of attending school like a regular 13-year-old, HARIMOTO was determined to make his mark.

“Age has nothing to do with table tennis,” shared HARIMOTO, who made history to become the youngest Junior World Champion in Cape Town last year. “I just wanted to play the game my way. I just wanted to attack and I did this right from the beginning. In the next match, I want to try to use the same tactics and play the same style as today.”

After HARIMOTO’s unbelievable upset, Romania’s Elizabeta SAMARA followed suit to join the list of giant slayers in Düssledorf. After losing the first two games to world number ten Hitomi SATO (JPN), SAMARA was quick to recover and turn the tides to her favor in the game. The world number 31 prevailed in the seven games thriller, winning narrowly by 4-3 (5-11, 8-11, 11-7, 11-8, 4-11, 11-8, 11-8).

In the highly anticipated clash between crowd favorite Timo BOLL (GER) and reigning World Champion MA Long (CHN) against World number two & three, FAN Zhendong (CHN) & XU Xin (CHN), the near sellout crowd were treated to an action-packed world-class exhibition. The local fans were left disappointed in the end, as the Chinese duo FAN & XU won 4-1 (11-13, 12-10, 11-8, 11-9, 11-8) to advance to the Men’s Doubles Quarterfinals.