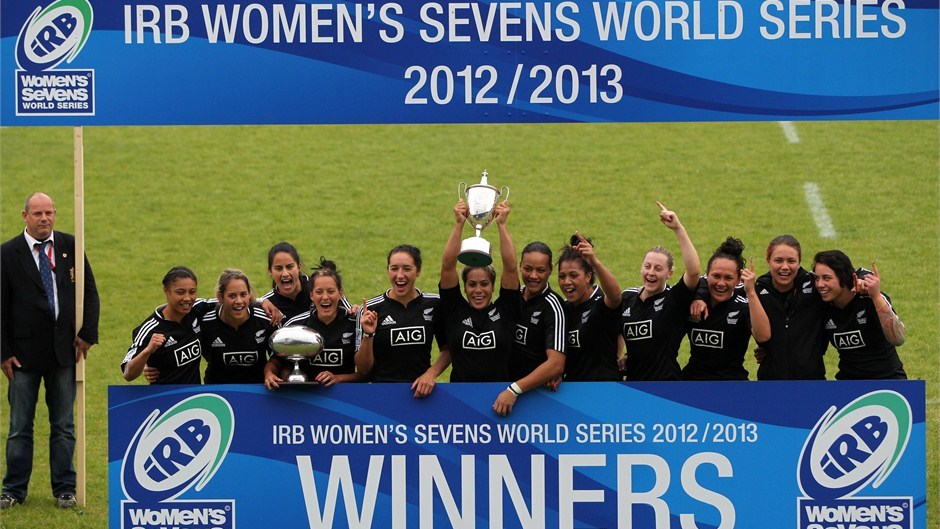 Amsterdam – Netherlands, May 18, 2013: IRB Women, New Zealand became the first ever winner of the Women’s Sevens World Series after sealing victory at the Amsterdam Sevens earlier.

In an enthralling and tense final, the New Zealanders beat a highly spirited Canadian side 33-24 in a game that only saw New Zealand edge out victory in the last few minutes.

Sean Horan’s side had earlier beaten Spain 14-5 in the Cup quarter finals to ensure they would lift the inaugural World Series title as well, finishing the Series with 74 points, ahead of England, Canada, and USA.

And there was even better news for New Zealand’s women, as Portia Woodman ended the season as both the top points scorer (105) and top try scorer (21), which included a crucial touchdown in the final.

“We’ve worked very hard for it and I’m very happy for the girls. We are always striving to do our best and I am just really proud. We work very hard for each other and to take both trophies away is amazing and I couldn’t ask for more.”

New Zealand coach Sean Horan was delighted with the win, after a hard fought victory over the impressive Canadians.

“It is pretty special. We have some really special girls on this team and we’ve just come to learn.”

“We are just getting better and better and that is the idea. We are proud of the girls, a good bunch and we’re just enjoying the experiences of the Women’s Sevens World Series.”

The weather cleared in Amsterdam on Saturday with massive crowds turning out for the final round of what has been a remarkable IRB Women’s Seven’s World Series.

“The final between New Zealand and Canada was absolutely brilliant, and it demonstrated all that is good about Women’s Rugby,” said IRB Head of Competition and Performance Mark Egan, who was on hand to present the winning trophy.

“The inaugural Women’s Sevens World Series has achieved its aim of providing these elite athletes with top class competition around the world, and they’ve really prospered from it.”

“Along with the other events in Dubai, Houston and Guangzhou, it’s been a major building block for these girls on the road to the Rugby World Cup Sevens in Moscow next month, but also towards the Olympic Games in Rio in 2016,” he said.

Earlier in this afternoon’s action, Canada came from 7 points behind to beat England 12-7 in their semi final thanks to tries from Bianca Farella and Kelly Russell to reach their first Cup final of the season having earlier beaten North American rivals USA 19-5 with Kayla Moleschi, Mandy Marchak and former Canadian netball star Brittany Waters scoring their tries.

The USA won the Plate, while there was also celebration for hosts Netherlands who beat South Africa to win the Bowl.

Women’s Rugby is one of the fastest-growing team sports in the world and, in 2016, the finest female players will take their place alongside their male counterparts in Rio de Janeiro when Rugby returns to the Olympic Games.

The inception of the Women’s Sevens World Series is a key milestone in the ongoing development of both the competitive standards and the professionalism of the Women’s Game. —- IRB/Photo: Martin Seras Lima