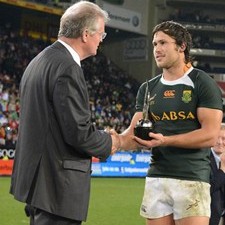 The 19-year-old just edged out Ireland’s JJ Hanrahan and team mate Shaun Adendorff to win the prestigious accolade following a comprehensive voting system which included the views of team managers, match officials and media at the tournament.

For the first time, the public also had a chance to vote on the shortlist via the official Facebook page www.facebook.com/irbjuniorworldrugby with more than 5,000 fans having their say.

“This Award has honoured some of the best players in the world, many of whom have gone on to make their full Test debuts and shine on the international stage,” said IRB Chairman Bernard Lapasset, in Cape Town after presenting Serfontein with his Award.

“I send my warmest congratulations to Jan and JJ Hanrahan and Shaun Adendorff who embodied the skill, passion and dedication which has given us three weeks of quite breathtaking Rugby here in Cape Town and Stellenbosch.”

Jan Serfontein said: “It’s a really awesome feeling, it hasn’t struck me yet, I think tomorrow the reality will come. This was really a team effort, anyone of us could have got this prize so it was hard work and team spirit that pulled us through.”

The 19-year-old centre from Port Elizabeth was exceptional throughout the tournament playing in every round, and completed a memorable event with an outstanding display in the final.

With Vodacom Cup experience already under his belt following a debut for the Blue Bulls this year, Serfontein has been a class player with excellent distribution of the ball. His elusive and creative play coupled with great vision and awareness were enough to see him claim the closely-fought Award.

2006 – IRB International U19 Player of the Year: Josh Holmes (Australia)

2006 – IRB International U21 Player of the Year: Lionel Beauxis (France)

2005 – IRB International U21 Player of the Year: Tatafu Polota-Nau (Australia)

2004 – IRB International U21 Player of the Year in association with Waterford Crystal: Jerome Kaino (New Zealand)

2003 – IRB U21 Player of the Year in assoc. with Waterford Crystal: Ben Atiga (New Zealand)