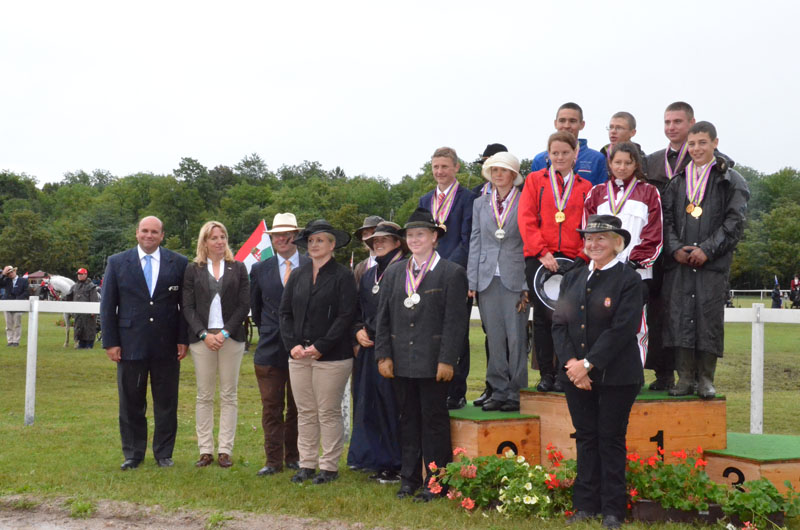 By Cindy Timmer, Wiener Neustadt (AUT), July 15, 2012: The first edition of the FEI European Driving Championships for Children, Juniors and Young Drivers will be remembered as a great success despite the wet weather. The Theresianic Military Academy in Wiener Neustadt, Austria welcomed 39 drivers from eight nations.

The Championships comprised three categories. The first one was for Children aged between 12 and 14; the second for Juniors aged between 14 and 18, and the third one for Young Drivers between 16 and 21 years old. All competed with single ponies. The competition was run according to FEI Rules with an official Dressage test followed by a marathon and a final obstacle driving competition. The marathon, designed by O-course designer Gunnar Larsson from Sweden, included three obstacles in the Children’s, five in the Juniors’ and six in the Young Drivers’ categories.

The hot weather held during the Dressage phase but the marathon and the obstacle driving competitions took place in the pouring rain. The Organisers managed to ensure the event went smoothly for all competitors. The young drivers displayed a very professional attitude which helped preventing accidents despite the slippery ground.

Hungary’s David Lehöcz with his pony Casanova Boy became the first FEI European Driving Champion for Children. The 13-year-old took the lead from the very beginning in the Dressage which was judged by five FEI international judges. Lehöcz was fourth in the marathon and remained at the top of the standings. He won the gold medal ahead of Christina Wagner and Pascal Bublitz, both from Germany.

The winner in the Juniors class is not a newcomer to international Driving despite his young age. Martin Hölle from Hungary, who had finished eighth in the FEI World Driving Championships for Ponies 2011 in Lipica, was unbeatable. The 15-year-old and his eight-year-old experienced pony Apache de la Licorne came in first in all three phases of the competition. Polish driver Monika Swiecicka, who had also competed at Lipica 2011, claimed silver, ahead of Germany’s Kerstin Möllers in bronze.

The medals in the Young Drivers class were decided in the obstacle driving competition. The 17-year-old Gilles Pirotte from Belgium and the pony Rubens were in the lead after Dressage and the marathon. Pirotte exceeded the time allowed in the obstacle driving competition by a fraction of a second, but the 1.02 penalty points he scored did not put in danger his gold medal. Jacqueline Pirhofer, who had finished ninth in Lipica in 2011, was in third place before the cones but moved up to silver after driving a double clear round. Great Britain’s Rosanna Walters-Symons took the bronze medal.

Hungary won team gold ahead of Germany in silver. Host nation Austria could not unfortunately be placed.

“I am very happy I won the gold medal. It was a good organisation. The marathon was not heavy because it had not rained yet when we were on the course.”

“It was different compared to the Pony World Championships in Lipica 2011, because here there were only young drivers. The marathon felt good and the obstacle driving competition was difficult because of the slippery ground.”

“I came here with my trainer André Wynants and my parents. I am very happy with the course. The ground in the marathon and the cones was very slippery. I was under much pressure in the cones because we were so close together and there were many good drivers in our class.”

“We saw a clear improvement compared to the last competition for young drivers held two years ago in Hungary. Progress has been made in all the categories. It was a positive and harmonious event with a very good atmosphere amongst the competitors. The competition site in Wiener Neustadt was well prepared and perfect for the occasion.”